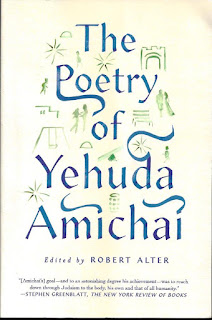 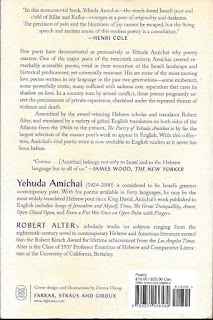 "In this monumental book, Yehuda Amichai-the much-loved Israeli poet and child of Rilke and Kafka-emerges as a poet of originality and darkness.
The precision of pain and the blurriness of joy cannot be escaped, but the living speech and ancient music of this molten poetry is a consolation."
-HENRI COLE
Few poets have demonstrated as persuasively as Yehuda Amichai why poetry matters. One of the major poets of the twentieth century, Amichai created remarkably accessible poems, vivid in their evocation of the Israeli landscape and historical predicament, yet universally resonant. His are some of the most moving love poems written in any language in the past two generations-some exuberant, some powerfully erotic, many suffused with sadness over separation that casts its shadow on love. In a country torn by armed conflict, these poems poignantly assert the preciousness of private experience, cherished under the repeated threats of violence and death.
Assembled by the award-winning Hebrew scholar and translator Robert
Alter, and translated by a variety of gifted English translators on both sides of the Atlantic from the 1960s to the present, The Poetry of Yehuda Amichai is by far the largest selection of the master poet's work to appear in English. With this collection, Amichai's vital poetic voice is now available to English readers as it never has been before.
"Genius ... [Amichai] belongs not only to Israel and to the Hebrew
language but to all of us." -JAMES WOOD, THE NEW YORKER
Yehuda Amichai (1924-2000) is considered to be Israel's greatest contemporary poet. With his poems available in forty languages, he may be the most widely translated Hebrew poet since King David. Amichai's work published in English includes Songs of Jerusalem and Myself, Time, The Great Tranquillity, Amen, Open Closed Open, and Even a Fist vvas Once an Open Palm with Fingers.
ROBERT ALTER's scholarly works on subjects ranging from the eighteenth-century novel to contemporary Hebrew and American literature earned him the Robert Kirsch Award for lifetime achievement from the Los Angeles Times.
Alter is the Class of 1937 Professor Emeritus of Hebrew and Comparative Literature at the University of California, Berkeley.
Note: Cuốn này, thấy cũng đã lâu, nhưng lần lữa không chịu cầm về, vì nghĩ, chết đến đít rồi, đâu kịp đọc. Bữa này, đành tắc lưỡi, chết kệ cha chết, đọc 1, 2 bài chắc vưỡn còn kịp.
Nhà thơ Israeli được yêu nhất, đứa con của Rilke và Kafka - nổi lên như là 1 nhà thơ của uyên nguyên và bóng tối.
Sự chính xác của nỗi đau và lờ tù mờ của niềm vui không thể nào trốn chạy, nhưng lời nói sống động và âm nhạc xa xưa của thứ thơ được nấu chảy này là niềm an ủi.
Bởi là vì số phận của Do Thái có gì tương tự với lũ Ngụy, nên Gấu phải nhặt tập thơ này về nhà.
I Wasn’t One of the Six Million: And What Is My Life Span? Open Closed Open
Gấu đâu nằm trong số 3 triệu người ngỏm vì cuộc chiến Mít: Vậy thì đời của Gấu ngắn dài ra sao? Mở Đóng Mở

The air over Jerusalem is saturated with prayers and dreams
like the air over industrial cities.
It's hard to breathe.

And from time to time a new shipment of history arrives
and the houses and towers are its packing materials.
Later these are discarded and piled up in dumps.

And in enclosed gardens heavy with jasmine
foreign consulates,
like wicked brides that have been rejected,
lie in wait for their moment.

All the Generations Before Me

I am getting close to the age when my father died.
My will is patched in many places.
Each day I have to change my life and my death
to fulfill all the prophecies
that prophesied me. So they won't be lies.
That's a big obligation.

I have passed my fortieth year. There are
places where I wouldn't be hired
for that very reason. If I'd been in Auschwitz,
they wouldn't have sent me to work,
they would have burned me on the spot.
That's a big obligation.