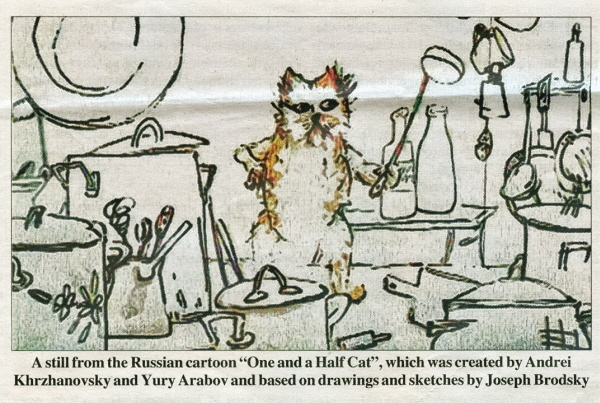 Estate of Joseph Brodsky
To the editors:
I would like to offer two comments on your June 12 review of Valentina Polukhina's "Brodsky Through the Eyes of His Contemporaries."
The reviewer, Gerald Smith, writes, "Access to Joseph Brodsky's private papers has been blocked for fifty years following his death." This is not precisely correct. In 1995, Brodsky himself closed certain private papers held by the National Library of St. Petersburg, which he had been unaware were publicly available there, for forty years. The remainder of that archive, consisting of thousands of pages of manuscripts, notebooks, and other documents left behind by Brodsky upon his emigration in 1972, is open to scholars. The Beinecke Rare Book and Manuscript Library in New Haven, Connecticut, holds papers in Brodsky's possession at the time of his death, including those he preserved after his emigration and a number that he saved or accumulated from before his emigration. Except for a few pages closed for non-biographical reasons, these are entirely open to scholars, again thousands of pages. These terms are available to any scholar who inquires about access to the papers. The Brodsky archives are being actively studied and have been cited in numerous scholarly settings and are currently being analyzed by a team of textologists for a multi-volume, bilingual scholarly collection of Brodsky's work.
Second, Professor Smith writes, "That his estate puts obstacles in the way of [Professor Polukhina] of all people is baffling." The Estate of Joseph Brodsky has a policy of not interfering with scholarly research. The only source I can identify for this remark is that Brodsky himself, a well known skeptic about the value of literary biography, asked that a request be distributed to his friends and relatives after his death that they not participate in biographical research. (Indeed, he wrote to Professor Polukhina herself in 1988: "I am willing to help you in any way I can with regard to your textological studies—in so far as they touch upon one or another of my texts. As for my life, the physical existence of my person that is, I would ask you and all those who are interested in my work, to leave it in peace.") We distributed this message as requested, but leave to its recipients how to respond to it, and we do not undertake to interpret or enforce it.
I apologize for wearying non-specialists with such arcana, but felt I should state the matter clearly to avoid confusion.
Ann Kjellberg
Executor and Trustee
Estate of Joseph Brodsky
Note: Câu của Brodsky viết về ông, về cái xác thân là cái bị thịt hôi thối, như Phật nói, mà chẳng hách sao?
*