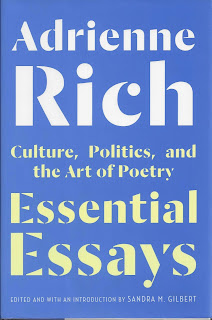 NOT HOW TO WRITE POETRY, BUT WHEREFORE

"Masters". For all the poetry I grew up with-the Blake, the Keats, the Swinburne and the Shelley, the Elizabeth Barrett Browning, the Whitman, the domesticated versions of Dickinson-in my twenties a greater ocean fell open before me, with its contradictory currents and undertows. Frost, Wylie, Millay seemed like shoreline tidal pools: out beyond lay fogs, reefs, wrecks, floating corpses, kelp forests, sargasso silences, moonlit swells, dolphins, pelicans, icebergs, suckholes, hunting grounds. Young, hungry, I was searching, within the limits of time and place and sex, for words to match and name desire.

Rilke's poem, the antique marble torso of Apollo glinting at the passerby through its pectorals like eyes, saying: “Du musst dein Leben iindern”, You have to change your life. Finding J. B. Leishman and Stephen Spender's translations of Rilke in a bookstore in Harvard Square (at first, thinking this Rainer Maria might be a woman). “Du musst dein Leben iindern”. No poem had ever said it quite so directly. At twenty-two it called me out of a kind of sleepwalking. I knew, even then, that for me poetry wasn't enough as something to be appreciated, finely fingered: it could be a fierce, destabilizing force, a wave pulling you further out than you thought you wanted to be.
You have to change your life.
•
In his editor's foreword to my first book of poems, published in 1951, W. H. Auden praised my "talent for versification" and "craftsmanship," while explaining to and of my poetic generation:

Radical changes and significant novelty in artistic style can only occur when there has been a radical change in human sensibility to require them. The spectacular events of the present time [did he mean the revelations of the Holocaust? the unleashing of nuclear weapons? The dissolution of the old colonial empires?] must not blind us to the fact that we are living not at the beginning but in the middle of a historical epoch; they are not novel but repetitions on a vastly enlarged scale and at a violently accelerated tempo of events which took place long since.
Every poet under fifty-five cherishes, I suspect, a secret grudge against Providence for not getting him [sic] born earlier.'

If anything, I cherished a secret grudge against Auden-not because he didn't proclaim me a genius, but because he proclaimed so diminished a scope for poetry, including mine. I had little use for his beginnings and middles. Yet he was one of the masters. I had read his much-quoted lines:

... poetry makes nothing happen; it survives
In the valley of its saying where executives
Would never want to tamper; it flows south
From ranches of isolation and the busy griefs,
Raw towns that we believe and die in; it survives,
A way of happening, a mouth.'

Auden had written that in January 1939, elegizing W. B. Yeats. He ended it with a charge to living poets (or so I read it; maybe he was still talking to Yeats):

In the nightmare of the dark
All the dogs of Europe bark,
And the living nations wait,
Each sequestered in its hate;

Intellectual disgrace
Stares from every human face,
And the seas of pity lie
Locked and frozen in each eye.

Follow, poet, follow right
To the bottom of the night,
With your unconstraining voice
Still persuade us to rejoice.

With the farming of a verse
Make a vineyard of the curse,
Sing of human unsuccess
In a rapture of distress;

In the deserts of the heart
Let the healing fountain start,
In the prison of his days
Teach the free man how to praise."

But I was growing up in a postwar world where executives were increasingly tampering with everything, not least the valleys of saying. And in that world-or in the sector of it I could perceive around me-both women and poetry were being redomesticated .
•
“Masters”. In my college years T. S. Eliot was the most talked-of poet. The Cocktail Party played on Broadway at that time; his name and work were already part of student conversations, alluded to in courses. I listened to lectures on The Waste Land, the Four Quartets, earnestly taking notes, trying to grasp the greatness. I came to Eliot's poetry with the zeal of a young neophyte discovering the new and admired.

I came to it also as a young person utterly disaffected from Christianity and from organized religion in general. My experience of the suburban Protestant Church was that it had nothing whatsoever to do with changing one's life. Its images and rituals were wedded to a world I was trying to escape, the world of passionless respectability. I wanted nothing more to do with it. But how could an eighteen-year-old girl from Baltimore critique the fact that the greatest modern poet in English (as everyone seemed to agree) was a High Church Anglican? In my lecture notes, penciled on the endpapers of the copy of Four Quartets that I still have, I find: "This = problem of a Christian poem in a secular age-you can't accept it unless you accept Christian religion." The lecturer was F. O. Matthiessen, one of Eliot's earliest interpreters, who one year later, in a suicide note, described himself as a Christian and a socialist. He was also a homosexual.

My Jewish father, calling himself a Deist, my Protestant-born mother, secular by default (as, perhaps, married to a Christian, she'd have been Christian, without strong convictions either way), had sent me to church for several years as a kind of social validation, mainly as protection against anti-Semitism. I learned nothing there about spiritual passion or social ethics. If the liturgy found me, it was through the Book of Common Prayer, mostly the poetry of the King James Bible contained in it. I used to walk home from church feeling that I must be at fault: surely, if I were truly receptive, I would feel "something" when the wafer was given, the chalice touched to my lips. What I felt was that I was acting-we were all in a pageant or a play. Nor was this theater magical. Christianity as thus enacted felt like a theological version of a social world I already knew I had to leave. Sometimes, having to pull away from a world of coldness, you end up feeling you yourself are cold. I wrote this disaffection into an early poem, "Air without Incense."

Christianity aside, there was for me a repulsive quality to Eliot's poetry: an aversion to ordinary life and people. I couldn't have said that then. I tried for some time to admire the structure, the learnedness, the cadences of the poems, but the voice overall sounded dry and sad to me. Eliot was still alive, and I did not know how much his poetry had been a struggle with self-hatred and breakdown; nor was I particularly aware that his form of Christianity, like the religion I had rejected, was aligned with a reactionary politics. He was supposed to be a master, but, as the young woman I was, seeking possibilities-and responsibilities-of existence in poetry, I felt he was useless for me.
•
What I lacked was even the idea of a twentieth-century tradition of radical or revolutionary poetics as a stream into which a young poet could dip her glass. Among elders, William Carlos Williams wrote from the landscape of ordinary urban, contemporary America, of ordinary poor and working people, and in a diction of every-day speech, plainspoken yet astonishingly musical and flexible. But I don't recall being taken out of my skin by any Williams poem, though later I would work with his phrasing and ways of breaking a line as a means of shedding formal metrics. Muriel Rukeyser, the most truly experimental and integratedly political poet of her time, was unknown to me except by her name in a list of former Yale Younger Poets. I don't recall the publication of The Life of Poetry in 1949. No one-professor or fellow student-ever said to me that this was a book I needed. And not even the name of Thomas McGrath, the great midwestern working-class poet, was known to me. His chap books and small-press editions were not published or discussed by critics in the East; he was himself on the McCarthyite blacklist. Even the Left and Communist journals had trouble with his poetry, finding it "difficult" and unorthodox." In fact, I was to discover Rukeyser only in the late 1960s with the poetry readings against the Vietnam War and, soon after, with the rising women's movement in which she was, late in her life, a powerful voice. I did not read McGrath until the 1980s, when his long historical and autobiographical "Letter to an Imaginary Friend" became available in its entirety. But, in my early twenties, was my life ready for Rukeyser and McGrath? Perhaps not. Yet each of them was asking urgent questions about the place of poetry, questions I had as yet no language for .
•
I was exceptionally well grounded in formal technique, and I loved the craft. What I was groping for was something larger, a sense of vocation, what it means to live as a poet-not how to write poetry, but wherefore. In my early twenties I took as guide a poet of extreme division, an insurance executive possessed by the imagination. But if I was going to have to write myself out of my own divisions, Wallace Stevens wasn't the worst choice I could have made.