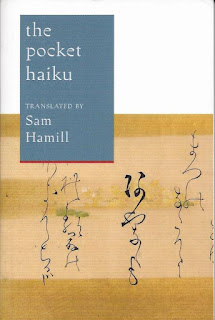 Haiku is the most popular poetic form in the world, practiced virtually everywhere, with ever-growing haiku societies meeting regularly to exchange and explore. In just three lines totaling seventeen syllables (5-7-5), a haiku presents a brief mediation in which the reader or listener is invited to participate, using imagery drawn from intensely careful observation. The more deeply the reader enters into the authentic experience of the poem, the more the poem reveals.
Haiku has its origins in the "linked verse" (renga) of Japan, a genre of collaborative poetry that was popular as a kind of parlor game among the court literati of the seventeenth century. The opening three-line stanza of a renga is called a hokku. Soon this short verse sprung free from renga and began to articulate aesthetic qualities, such as a sense of beautiful aloneness (sabishisa) and restrained elegance (juryu). Having evolved into an art form all its own, the standalone hokku was renamed "haiku" in the nineteenth century.
Basho (1644-1694) was not the first poet to write haiku, but he is its greatest master.
Born into a samurai family prominent among nobility, he rejected the comforts of court life and became a wanderer, studying Zen, history, and classical Chinese poetry, living in apparently blissful poverty under a modest patronage and on donations by his many students. He is said to have brought renso to haiku-that is, a web of associated ideas requiring an active mind on the part of the listener. When he writes,

How reluctantly
the bee emerges from deep
within the peony

is he merely presenting a pathetic fallacy, attributing human emotion to a bee, or is he entering into the authentic experience of "beeness" as deeply as possible? Perhaps both qualities are present. His detailed observation calls for something other than metaphor; it demands literal accuracy. Is the bee inside his mind or outside? The poem moves in part because of tension raised through the underlying question of duality that Zen resolves in silence. The bee, the peony, the poet-all one idea composed of many.
In another poem, Basho finds

Deliqbt, then sorrow,
aboard the cormorant
fishing boat

without having to describe for his audience the nooses that the fisher folk tie around the throats of the fishing birds to inhibit them from swallowing their catch. He is initially delighted by the amazing skill and grace of the birds, then horrified and saddened by their captivity and exploitation, and perhaps even more deeply saddened by the fisherfolk he never mentions. What remains unstated begs for a profound moral equation, but only the poet's compassion is clearly implied.
Basho brought to haiku "the way of elegance" (fuga-no-michi), deepened its Zen influence, and approached poetry itself as a way of life (kado, the way of poetry). As in the tea ceremony, the way of elegance in haiku involves highly focused attention to detail as revealed through Zen practice. This constantly attentive state, and the discipline of writing, becomes for the poet a means of self-cultivation and a source of enlightenment.
Not only is Basho the supreme artist of haiku, he is also a master of haibun, a literary form that combines prose with haiku. His Narrow Road to the Interior, a travelogue of his long walking tour of some of Japan's wildest back country leading to its western coast, is absolutely nonpareil in the literature of the world.
If Basho is the great river of haiku, Buson and Issa are major tributaries. In contrast to the solitary Basho, Buson (17I5-1783) was a devoted family man. He was also a very successful painter who popularized haiga, small watercolor or ink paintings that accompanied haiku. While he claimed to have "sought what Basho sought," he did not share his master's rigorous Zen discipline nor his deep classicism. Buson's major contribution was his painter's eye-that is, his highly refined sensibility and power of evocation:

Moon in midsky, high
over the village hovels
and wandering on

Sometimes his observations led him, like his fellow masters, to write with great joy and laughter:
With no underrobes,
bare butt suddenly exposed-
a gust of spring wind
Whereas Buson's haiku were developed in a state of relative comfort, Issa's haiku are hard-earned, written from a life of suffering. When Issa (1762 -1826) was just a small boy, his mother died, and his stepmother was a plague on his soul until he left home at age fourteen. He lived in poverty for more than two decades, until returning to his home village for his father's death in 1801. Although Issa was named principal heir in his father's will, his stepmother and half-brother conspired successfully to keep him from the property for thirteen more years. He would eventually write,

In my dear old village,
every memory of home
pierces like a thorn

When Issa finally returned from Edo (modern Tokyo), he married a young village woman and had children, but all five of them died, as did she. Four years later he married again, and then his house burned down. He spent the last few months of his life living in a storehouse with his pregnant wife, who gave birth to the child he had always longed for-a baby girl-shortly after his death.
Neither as at ease as Basho nor as composed as Buson, Issa wrote a more personal poetry, moving steadily into a Pure Land Buddhist philosophy that expresses devotion without getting caught up in the snares of religious dogmatism. His poems are prized for their remarkably compassionate and poignant insights, even if they do sometime the line of sentimentality. Follow death of one of his children, he wrote,

The poem doesn't "close" but with an opening into the silence of knowing: "and yet .. :' As with most haiku, this silence is a continuance of the poem and is its most important part.
The great age of haiku spam little over a hundred years, and poetry is a river that continues to flow. In our own age and language, wonderful haiku have been written by poets as diverse as Gary Snyder, Richard Wright, Lew Welch, and Richard Wilbur, to name but a few.
At the very heart of haiku, one realizes a fully attentive and finely focused mind. As Onitsura wrote,
True obedience:
silently the flowers speak
to the inner ear
SAM HAMILL
Anacortes, Washington
2013