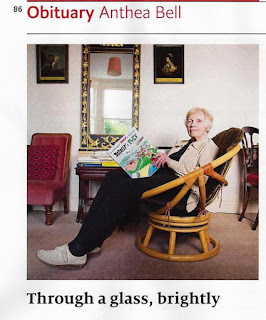 Through a glass, brightly

Anthea Bell, doyenne of English literary translators, died on October 18th, aged 82
THE FIERCEST dispute in the world of literary translation, where knuckles may be bared over the precise nuance of solitaire or Gestalt, concerns whether the translator should be visible or not. Anthea Bell, one of the most acclaimed, knew exactly where she stood. She wished to be glass. The glass, for example, through which the narrator of W.G. Sebald's "Austerlitz" observed a raccoon in the artificial dusk of the Nocturama at Antwerp Zoo, "washing the same piece of apple over and over again, as if it hoped that all this washing, which went far beyond any reasonable thoroughness, would help it to escape the unreal world in which it had arrived, so to speak, through no fault of its own." Or the "window panes covered by frost-flowers" of the little houses through which Franz Kafka's K. struggled on his way to the Castle, "pulling his feet out of [the snow) as they kept sinking in again", hearing the great bell ring "with a lively, cheerful note, although the sound was painful too, and made his heart quail momentarily as if threatened with getting what it vaguely desired."
At the desk where she worked in her small house in Cambridge, she looked out at the garden through two panes. One was modern, perfectly transparent; the other old, with small distorting flaws. She felt she was the second, interpreting freely rather than literally. What mattered was to spin the illusion that the books she translated-chiefly from French and German, though she had learned Danish, over a single Christmas, for Hans Christian Andersen's fairy tales-had originally been written, even thought, in English. Her last act was always to put the original aside and read through in English only. Readers would be sure to pounce on anything clumsy. At the same time she did not want to lose the foreign feel of a book entirely, and indeed could not start until she had found the writer's voice. She was ever aware of that tension, proceeding obliquely and open-eyed, like the soft-pawed Birman cats who really ruled her house. One of her favorite projects was E.T.A. Hoffmann's "The Life and Opinions of the Tomcat Murr" (1819-21), in which Murr's scribblings on scraps emerged as the work of a true genius, "possessed of intellect, understanding, and sharp claws".
Wit and melancholy often shared her desk, with several projects on the go at once. She would try anything except poetry, which she felt should not be touched unless it was deliberately bad. The wild novellas of Stefan Zweig, a neglected Austrian writer, or the teenage fantasy of the Inkheart series, or the cliché-ridden memoirs of Hitler's last secretary, were balanced by the anarchic fun of the Asterix comics, her main work for years. Invisibly, as before, she presented the cascading jokes and puns of the indomitable Gaulish villagers as if they had been minted in English; many readers, to her delight, supposed they had been. Thus Idefix (Asterix's dog) became Dogmatix, Assurancetourix (the bard) Cacofonix, and Panoramix (the druid) Getafix-not, she stressed, because he was on drugs (would she dream of such a thing?) but because he got a fix on the stars. Two Roman soldiers became Sendervictorius and Appianglorious; a British-Irish chieftain was O'veroptimistix. She was determined to "carry across" as many jokes, and learned digs, as she could. One swordfight, originally in the literary style of Cyrano de Bergerac, she made Shakespearean, Laertes fighting Hamlet. The cry of one shipwrecked pirate on a raft, "Je suis médusé!" (an allusion to Gericault's "Raft of the Medusa", which also meant "I'm dumbstruck"), became "We've been framed, by Jericho!"
She had never expected to have such fun translating, but then the whole thing was unplanned. A childhood spent with Loeb classics, those tempting little red and green volumes of parallel texts, gave her a love of languages that she took to Oxford, but she swapped all that "like a good girl", as she said, for a secretarial course when she got married. Her first translation, which fell to her simply because she had German, was done with her first baby in a carry-cot beside her. Appropriately it was Otfried Preussler's "The Little Water Sprite", a children's story, observed through the window of a house beneath a mill-pond.
Every part of her career pleased her. To work with living authors was a privilege, especially when they could wrestle English almost as well as she could. Sebald, "Max" to her, sent back her drafts by post, eschewing email; she treasured the way his central European melancholy and wandering sub-clauses touched the scenes of her native East Anglia. Rene Goscinny, of Asterix, loved her puns round "old fruit" in ''Asterix in Britain", wishing he had thought them up himself. Rough-drafting, polishing and tweaking were equally satisfying. She revelled in the encyclopedic knowledge needed to capture the exact shading of phrases, and blessed the internet for allowing her to track down, through their Latin names, obscure plants and birds. There were nice surprises: that Freud, like her, got such mileage from wordplay (though they were called slips, with him), and that Kafka was funny. Best of all, she was bringing great authors forward to seduce new eyes and minds.

Watching at the feast

As the pages of their works were turned, there was no trace of the translator. After the title page, she disappeared. And yet she inhabited the works so completely that she was surely somewhere in the scene. Perhaps she was in Sebald's Salle des pas perdus in Antwerp Central Station, where "the railway passengers seemed to me somehow miniaturised, whether by the unusual height of the ceiling or because of the gathering dusk, and it was this, I suppose, which prompted the passing thought, nonsensical in itself, that they were the last members of a diminutive race which had perished or been expelled from its homeland, and that because they alone survived they wore the same sorrowful expression as the creatures in the zoo." Or perhaps she was giggling behind the tree where Cacofonix sat gagged and fuming, at the end of most Asterix adventures, while beer-horns were raised at a great village feast and wild boar rapturously devoured, in French ("Scrotch! Scrotch!") or English ("Scrunch!") .•