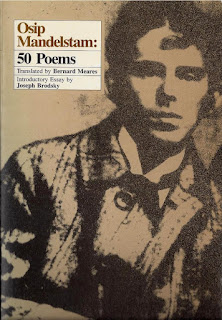 I returned to my city, familiar as tears,
As veins, as mumps from childhood years.

You've returned here, so swallow as quick as you can
The cod-liver oil of Leningrad's riverside lamps.
Recognize when you can December's brief day:
Egg yolk folded into its ominous tar.
Petersburg, I don't yet want to die:
You have the numbers of my telephones.
Petersburg, I have addresses still
Where I can raise the voices of the dead.
I live on the backstairs and the doorbell buzz
Strikes me in the temple and tears at my flesh.
And all night long I await those dear guests of yours,
Rattling, like manacles, the chains on the doors.
(221, 144*)
December, 1930, Leningrad

But once a year Nature is bathed in length,
Which is the source of Homer's metric strength.
Like a caesura that day yawns wide,

So we might as well try setting sail:
Huge and clumsy creaks the turning wheel...

(The Twilight of Freedom)

But the stones were already flying, and so was the bird. In the translator's introduction, the reader of this book will find some descriptions of their trajectories. Still, it is important to note that Mandelstam's attitude toward a new historical situation: on the whole he regarded it as just a harsher form of existential reality, as a qualitatively new challenge. Ever since the Romantics we have had this notion of a poet throwing down the glove to his tyrant. Now if there ever was such a time at all, this sort of action is utter nonsense today: tyrants are not that available any longer. The distance between us and our masters can be reduced only by the latter, which seldom happens. A poet gets into trouble because of his linguistic, and, by implication, his psychological superiority, rather than his politics. A song is a form of linguistic disobedience, and its sound casts a doubt on more than a concrete political system: it questions the entire existential order. And the number of its adversaries grows proportionally.
It would be a simplification to think that it was the poem against Stalin which brought about Mandelstam's doom. This poem, for all its destructive power, was just a by-product of Mandelstam's treatment of the theme of this not-so-new era. For that matter, there is a much more devastating line in the poem called "Ariosro" written earlier the same year (1933): "Power is repulsive as were the barber's hands..." There were others, too. And yet I think that by themselves these mug-slapping comments wouldn't invite the law of annihilation. The iron broom that was walking across Russia could have missed him if he were merely a political poet or a lyrical poet slipping into politics. After all, he got his warning (see the translator's introduction) and he could have learned from that as many others did. But he didn't, because his instinct for self-preservation had long since yielded to his ethics. It was the immense intensity of lyricism in Mandelstam's poetry which set him apart from his contemporaries and made him an orphan of his epoch, "homeless on an all-union scale." For lyricism is the ethics of language, and the superiority of this lyricism to anything that could be achieved within a human interplay is what makes for a work of art and lets it survive. Because of that, the iron broom, whose purpose was the spiritual castration of the entire populace, couldn't have missed him.
It was a case of pure polarization. Song is, after all, restructured Time, toward which mute Space is inherently hostile. The first has been represented by Mandelstam, the second chose the State as its weapon. There is a certain terrifying logic in the location of that concentration camp where Osip Mandelstam died in 1938: near Vladivostok, in the very bowels of the state-owned Space. This is about as far as one can get from Petersburg inside Russia. And here is how high one can get in poetry in terms of lyricism (the poem is in memory of a woman, Olga Vaksel, who died in Sweden, and was written while Mandelstam was living in Voronezh where he was transferred from his previous place of exile near the Ural Mountains after having a nervous breakdown). Just four lines:
... And stiff swallows of round eyebrows(a)
flew(b) from the grave to me
to tell me they've rested enough in their(a)
cold Stockholm bed(b).
Imagine a four-foot amphibrach with altered (a b a b) rhyme.
This strophe is an apotheosis of restructuring Time. For one thing, language is itself a product of past. The return of these stiff swallows implies both the recurrent character of their presence, and/or the simile itself, either as an intimate thought or a spoken phrase. Also, "flew ... to me" suggests spring, returning seasons. "To tell me they've rested enough" too suggests past, past imperfect because not attended. And then the last line makes a full circle because the adjective "Stockholm" exposes the hidden allusion to Hans Christian Andersen's children's story about the wounded swallow wintering in the mole's hole, then recovering and flying home. Every schoolboy in Russia knows this story. The conscious process of remembering turns out to be strongly rooted in the subconscious memory and creates a sensation of sorrow so piercing, as if this is not a suffering man we hear, but the very voice of his wounded psyche. This kind of voice surely clashes with everything, even with its medium's-i.e., poet’s-life. It is like Odysseus tying himself to a mast against the call of his soul; this-and not only the fact that Mandelstam is married-is why he is so elliptical here.
He worked in Russian poetry for thirty years, and what he did will last as long as the Russian language exists. It will certainly outlast the present and any subsequent regime in that country, both because of its lyricism and its profundity. Quite frankly, I don't know anything in the poetry of the world comparable to the revelatory quality of these four lines from his "Verses on the Unknown Soldier," written just a year prior to his death:

An Arabian mess and a muddle,
The light of speeds honed into a beam-
And with its slanted soles,
A ray balances on my retina...

There is almost no grammar here but it is not a modernistic device, it is a result of an incredible psychic acceleration, which at other times was responsible for the breakthroughs of Job and Jeremiah. This honing of speeds is as much a self-portrait as an incredible insight into astrophysics. What he heard at his back "hurrying near" wasn't any "winged chariot" but his "wolf-hound century," and he ran till there was Space. When Space ended, he hit Time.

I've come back to my city. These are my own old tears,
my own little veins, the swollen glands of my childhood.
So you're back. Open wide. Swallow
the fish oil from the river lamps of Leningrad.
Open your eyes. Do you know this December day,
the egg yolk with the deadly tar beaten into it?
Petersburg! I don't want to die yet!
You know my telephone numbers.
Petersburg! I've still got the addresses:
I can look up dead voices.
I live on back stairs, and the bell,
torn-out nerves and all, jangles in my temples.
And I wait till morning for guests that I love,
and rattle the door in its chains.
Leningrad. December 1930
1972, translated with
Clarence Brown
W.S. Merwin
I returned to my city, familiar to tears,
to my childhood's tonsils and
varicose veins.
You have returned here-then swallow
the Leningrad street-lamps' cod-liver oil.
Recognize now the day of December fog
when ominous street-tar is mixed with the yolk of egg.
Petersburg, I do not want to die yet
I have your telephone numbers in my head.
Petersburg, I still have addresses at which
I will find the voice of the dead.
I live on a black stair, and into my temple
strikes the doorbell, torn out with flesh.
And all night long I await the dear guests,
and I jangle my fetters, the chains on the door.