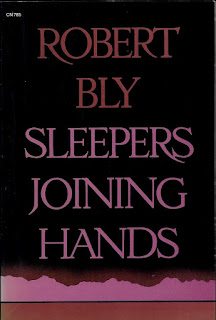 THE SUFI POETS believed in a universe beyond the sensory world, a place they called the mundus imaginalis, which is "a concrete spiritual world of archetype-Figures, apparitional Forms, Angels of species and of individuals," and it seems to me that it is there (or some place much like it) that Robert Bly has often gone to create his best work. Bly's poems keep opening up interior realms, like floors giving way, and have great spiritual access. At times he is Thoreau in Minnesota, scrupulously observing the natural world, preserving the wilderness that is both within and without, unleashing his wrath against imperial power. "The walls of my poetry are splashed with blood," he writes in his poem "The Trap-Door," "I don't want to be inward." At other times, he is like the fourteen-year-old Jabir the Brilliant arranging sounds so that they become holy. "Friends," he declares in the same poem, "each day I crawl over and kiss some of the books I love." Political outrage and spiritual reverence sit side by side in Bly's work.
These thoughts are occasioned by Bly's collection The Night Abraham Called to the Stars (2001), which received the Maurice English Poetry Award for a distinguished book of poems published during the preceding calendar year by a poet over fifty. Maurice English, who was a poet, a translator, and the director of the University of Pennsylvania Press, had a keen intelligence and a lifelong devotion to poetry, and Bly is a worthy recipient of an award in his honor.
Bly has often found models for his poems in other cultures, and in this book he displays his reverence for Islamic poetry, especially the work of Rumi and Hafez, by adapting the ghazal form. He ignores some key traditional elements of the ghazal, but he does capture its feeling of boundless surprise. What he especially loves about the form is how each stanza operates as an independent unit. The subject matter change from stanza to stanza, which gives a sense of leaping around, of rapidly shifting landscapes. Meanings accrue through association, and there is a liberating feeling of freedom within the prescribed form.
A sacred sense of gratitude animates Bly's poems, which move fluently between the material and the ethereal. Like Abraham from the Koran, the figure he writes about so well in the title poem of his new collection, he is "a man in love with the setting stars."

THE NIGHT ABRAHAM CALLED TO THE STARS

Do you remember the night Abraham first called
To the stars? He cried to Saturn: “You are my Lord!”
How happy he was! When he saw the Dawn Star,

He cried, "You are my Lord!" How destroyed he was
When he watched them set. Friends, he is like us:
We take as our Lord the stars that go down.

We are faithful companions to the unfaithful stars.
We are diggers, like badgers; we love to feel
The dirt flying out from behind our hind claws.

And no one can convince us that mud is not
Beautiful. It is our badger soul that thinks so.
We are ready to spend the rest of our life

Walking with muddy shoes in the wet fields.
We resemble exiles in the kingdom of the serpent.
We stand in the onion fields looking up at the night.

My heart is a calm potato by day, and a weeping,
Abandoned woman by night. Friend, tell me what to do,
Since I am a man in love with the setting stars.

About four, a few flakes.
I empty the teapot out in the snow,
feeling shoots of joy in the new cold.
By nightfall, wind,
the curtains on the south sway softly.

My shack has two rooms; I use one.
The lamplight falls on my chair and table
and I fly into one of my own poems-
I can't tell you where-
as if I appeared where I am now,
in a wet field, snow falling.

More of the fathers are dying each day.
It is time for the sons.
Bits of darkness are gathering around them.
The darkness appears as flakes of light.

Sitting Alone
There is a solitude like black mud!
Sitting in this darkness singing,
I can't tell if this joy
is from the body, or the soul, or a third place.

Listening to Bach
There is someone inside this music
who is not well described by the names
of Jesus, or Jehovah, or the Lord of Hosts!

'When I woke, new snow had fallen.
I am alone, yet someone else is with me,
drinking coffee, looking out at the snow.