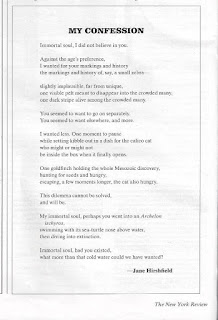 Immortal soul, I did not believe in you.

I wanted less. One moment to pause
while setting kibble out in a dish for the calico cat
who might or might not
be inside the box when it finally opens.

This dilemma cannot be solved,
and will be.

My immortal soul, perhaps you went into an Archelon
ischyros,
swimming with its sea-turtle nose above water,
then diving into extinction.
Immortal soul, had you existed,
what more than that cold water could we have wanted?
-Jane Hirshfield

Nothing to write home about.
No home to write home to.
Oh boohoo! I've never heard
Anything so disgustingly absurd.
The snow is falling crazily outside the window.

Now it's spring.
Still cold but the little birds this morning began to sing.
But the fucking pigeons are a constant curse.
Disgusting and absurd moans of human sexual intercourse
On the ledge outside my study window.

I'm leaping without wings,
Though I wouldn't mind having wings,
To you.
I'm leaping out my window to you.
Right through the screen of my computer into

Women don't like us any more
And hold meeting after meeting over what to do.
Surf's up!
They ride the big wave.
They're not why the planet may be doomed.

Picture a scene right out of Disney Classics of giant saguaro cactuses,
Enormous nude green hairless tubes with arms
That look like prehistory reaching out without hands.
I hear the goddamned pigeons making a baby.
We share a desert.

What are you looking at?
I dug and dug to get out
A contact lens that it turned out wasn't in my eye
And got instead a ghoulish
Eyeball of blood.
It didn't hurt and I could see just fine,
Though it looked as if one eye was slowly cooking in red wine.
When I see your tits on FaceTime I see stars.
I see Stars and Stripes and Stars and Bars.
I'm in the finally-escaping-with-the-human-species-to-Mars

Mode, winged but without wings, coldcocked by love, out cold, surf's up.
Get into your Skype outfit.
Prepare for departure from this planet.
The last standing naked saguaros stand
There in the desert inside the Carlyle Hotel lobby.

I look in the Men's Room mirror at a man and his blood thinner.
Why, it's you, Eliquis, dear friend!
I see myself for a fleeting second looking like someone else.
I like the tiny Cartier watch the fellow's wearing.
I remember when he was once in Tahiti.

Lift me off the ground, mighty Ezra Pound!
Sing me your lyrical skunk spray of Cantos.
Robert Lowell, I will join you soon.
I remember DVF's enchantment apartment in the Rue de Seine.
I remember Mumbai when it was Bombay.

England-where the English are-
Used to smile with bad English teeth in the toxic coal-fires air.
It was the London of T. S. Eliot,
St. Louisan and expatriate,
Who found love late.
-Frederick Seidel

The Mit version will be followed