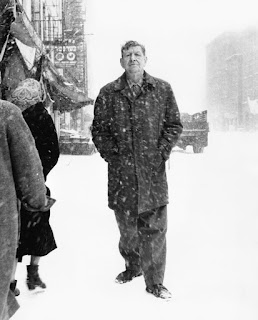 From 1975: “There was nothing more admirable in Auden than his complete sanity and his firm belief in sanity; in his eyes all kinds of madness were lack of discipline.”

In the forties, there were many who turned against their old beliefs, but there were very few who understood what had been wrong with those beliefs. Far from giving up their belief in history and success, they simply changed trains, as it were; the train of Socialism and Communism had been wrong, and they changed to the train of Capitalism or Freudianism or some refined Marxism, or a sophisticated mixture of all three. Auden, instead, became a Christian; that is, he left the train of History altogether. I don’t know whether Stephen Spender is right in asserting that “prayer corresponded to his deepest need”—I suspect that his deepest need was simply to write verses—but I am reasonably sure that his sanity, the great good sense that illuminated all his prose writings (his essays and book reviews), was due in no small measure to the protective shield of orthodoxy. Its time-honored coherent meaningfulness that could be neither proved nor disproved by reason provided him, as it had provided Chesterton, with an intellectually satisfying and emotionally rather comfortable refuge against the onslaught of what he called “rubbish;” that is, the countless follies of the age.
Rereading Auden’s poems in chronological order and remembering him in the last years of his life, when misery and unhappiness had grown more and more unbearable without, however, in the least touching either the divine gift or the blessed facility of the talent, I have become surer than ever that he was “hurt into poetry” even more than Yeats (“Mad Ireland hurt you into poetry”), and that, despite his susceptibility to compassion, public political circumstances were not necessary to hurt him into poetry. What made him a poet was his extraordinary facility with and love for words, but what made him a great poet was the unprotesting willingness with which he yielded to the “curse” of vulnerability to “human _un_success” on all levels of human existence—vulnerability to the crookedness of the desires, to the infidelities of the heart, to the injustices of the world.
Follow, poet, follow right
To the bottom of the night,
With your unconstraining voice
Still persuade us to rejoice;
With the farming of a verse
Make a vineyard of the curse,
Sing of human unsuccess
In a rapture of distress;
In the deserts of the heart
Let the healing fountain start,
In the prison of his days
Teach the free man how to praise.
Praise is the key word of these lines, not praise of “the best of all possible worlds”—as though it were up to the poet (or the philosopher) to justify God’s creation—but praise that pitches itself against all that is most unsatisfactory in man’s condition on this earth and sucks its own strength from the wound: somehow convinced, as the bards of ancient Greece were, that the gods spin unhappiness and evil things toward mortals so that they may be able to tell the tales and sing the songs.
I could (which you cannot)
Find reasons fast enough
To face the sky and roar
In anger and despair
At what is going on,
Demanding that it name
Whoever is to blame:
The sky would only wait
Till all my breath was gone
And then reiterate
As if I wasn’t there
That singular command
I do not understand,
Bless what there is for being,
Which has to be obeyed, for
What else am I made for,
Agreeing or disagreeing?
And the triumph of the private person was that the voice of the great poet never silenced the small but penetrating voice of sheer sound common sense whose loss has so often been the price paid for divine gifts. Auden never permitted himself to lose his mind—that is, to lose the “distress” in the “rapture” that rose out of it:
No metaphor, remember, can express
A real historical unhappiness;
Your tears have value if they make us gay;
O Happy Grief! is all sad verse can say.
It seems, of course, very unlikely that young Auden, when he decided that he was going to be a great poet, knew the price he would have to pay, and I think it entirely possible that in the end—when not the intensity of his feelings and not the gift of transforming them into praise but the sheer physical strength of the heart to bear them and live with them gradually faded away—he considered the price too high. We, in any event—his audience, readers and listeners—can only be grateful that he paid his price up to the last penny for the everlasting glory of the English language. And his friends may find some consolation in his beautiful joke beyond the grave—that for more than one reason, as Spender said, “his wise unconscious self chose a good day for dying.” The wisdom to know “when to live and when to die” is not given to mortals, but Wystan, one would like to think, may have received it as the supreme reward that the cruel gods of poetry bestowed on the most obedient of their servants. ♦
“Remembering Wystan H. Auden, Who Died in the Night of the Twenty-Eighth of September, 1973,” by Hannah Arendt. Copyright © 1975 by Hannah Arendt. Originally published in the January 20, 1975, issue of The New Yorker. Reprinted by permission of Georges Borchardt, Inc., on behalf of the author.

·         Hannah Arendt, the author of “The Origins of Totalitarianism,” died in 1975. Her earliest reporting for The New Yorker became the 1963 book “Eichmann in Jerusalem: A Report on the Banality of Evil.”