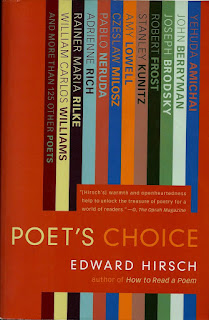 His beams shall cheer my breast, and both so twine,
Till ev'n his beams sing, and my musick shine.

THOMAS HARDY published "The Oxen" in the London Times on December 24, 1915. He based the poem on the traditional legend of oxen kneeling in their stables at midnight on Christmas Eve, which he first heard from his mother. He may also have recalled the carving of "a kneeling bovine" that he saw as a youth when he was working as an architect's apprentice on the restoration of Rampisham Church.
Hardy always associated the supernatural with the celebration of Christmas. I feel that in this poem he envied the people who sat comfortably in a Christian "flock" and never doubted the veracity of the tale of the kneeling animals. He had been one of them once. But, in the midst of World War I, which cast, as he said, "a shade over everything," that faith was forever denied him.
"The Oxen" is written, appropriately enough, in the common meter of the ballad stanza. It has a rustic English vocabulary (a "barton" is a farmyard, a "coomb" a valley) that reverberates with Christian overtones. There is a keen element of childish wonder in the poem, which he included in his book Moments of Vision (1917). Many years later, when Hardy was asked to choose twelve of his own poems for the library of Queen Mary's quirky doll's house, "The Oxen" was his first choice. His eyesight was too weak to manage it, but otherwise he would have transcribed the poem in miniature in his own handwriting.
Here, then, is my favorite Christmas Eve poem:
THE OXEN

Christmas Eve, and the twelve of the clock.
"Now they are all on their knees,"
An elder said as we sat in a flock
By the embers in hearths ide ease.

We pictured the meek mild creatures where
They dwelt in their strawy pen,
Nor did it occur to one of us there
To doubt they were kneeling then ..

So fair a fancy few would weave
In these years! Yet, I feel,
If someone said on Christmas Eve,
"Come; see the oxen kneel

"In the lonely barton by yonder coomb
Our childhood used to know,"
I should go with him in the gloom,
Hoping it might be so.

Hardy's poem is also collected in Christmas Poems, an erudite little anthology selected and edited by John Hollander and J. D. McClatchy. The editors point out that Christmas is both a holiday and a holy day, which has always been associated with poetry. Their garland traces a dramatic arc from the Annunciation to the Epiphany, and reaches a pinnacle in a sublime group of poems that centers on the Nativity, including pieces by John Milton, John Donne, Henry Vaughan, Christopher Smart, and T. S. Eliot. It contains requisite poems, songs, and carols everyone recognizes, such as ''A Visit from St. Nicholas" and "The Twelve Days of Christmas," as well as lesser-known but equally enchanting lyrics, such as this elegant little "Epiphany" by Robert Fitzgerald, which consists of one sentence strung across two rhyming quatrains:

Unearthly lightning of presage
In any dark day's iron age
May come to lift the hair and bless
Even our tired earthliness,

And sundown bring an age of gold,
Forged in faery, far and old,
An elsewhere and an elfin light,
And kings rise eastward in the night.