Obituary
Pierre Ryckmans
Pierre Ryckmans (Simon Leys), an old China hand, died on August 11th, aged 78
WRITERS choose pen names for many reasons. Pierre Ryckmans chose his—“Simon Leys”—to avoid being blacklisted by the Chinese authorities, who, he feared, would not appreciate his attempts to tell the world the truth about the horrors of Maoism and the Cultural Revolution. But his chosen surname contained a subtle clue as to who he really was. “Leys” was a homage to “René Leys”, a novel by the French author Victor Segalen, in which a Belgian teenager in old Peking regales his employer with tales of the hidden intrigues and conspiracies taking place within the imperial palace.
Like René, Mr Ryckmans was Belgian. He too had visited China when he was a teenager—in 1955, to be precise, on a trip with a group of fellow students that had culminated in an audience with Zhou Enlai, second in command, after Mao Zedong, of the newly minted People’s Republic. He had fallen in love with the place on that trip, he later wrote, and devoted his career to studying China.
And like René, he became famous for trying to tell his readers what was really going on, both within the palace walls and without. Swimming against the tide of intellectual opinion in the West, which tended to see Mao as an admirable champion of the ordinary Chinese worker, Mr Ryckmans described, with wit and anger and mordant humour, the skilfully choreographed shadow play that the regime presented to the world. Behind the talk of the victory of the proletariat and great leaps forward lay repression, famines and the terrorising of a nation.
He had not set out to write about politics, although he was himself a socialist, of the democratic, anti-totalitarian sort (George Orwell was a guiding light). His interests were painting, history and poetry: his writing was peppered with fond references to old Chinese proverbs and stories. Nor was he a China bore: he was as happy discussing Cervantes, sailing or the life of Napoleon as he was pondering the epigrams of Confucius (whose “Analects” he translated in 1997). But China remained his great love, and at first he “confidently extended to the Maoist regime the same sympathy that I felt for all things Chinese”.
It was while living in Hong Kong in the 1960s, when it was still a British colony, that the true nature of the regime became apparent to him. Pamphlets circulated describing the forced displacement of millions of people into the countryside in the Cultural Revolution. Rumours spread about denouncements of the ideologically unsound by friends or even family members. Thousands of desperate Chinese risked their lives to swim by night across the waters to Hong Kong, seeking sanctuary from the brutality.
Goaded from his comfortable ignorance, he wrote a book called “The Chairman’s New Clothes”, which described the Great Helmsman as an autocratic emperor in the old tradition, complete with jostling, scheming subordinates. It chronicled the murders and terror of the Cultural Revolution, and the destruction of books, temples and anything else that, to the fanatical Red Guards, was a reminder of China’s feudal past. In another book, “Chinese Shadows”, based on a six-month stint at the Belgian embassy in Beijing in 1972, he described the Cultural Revolution as “five years of upheaval, of blood and madness”, “the most gigantic frenzy…since the Taiping Rebellion” (in which, between 1850 and 1864, 20m people died) and a “deliberate destruction of intelligence and culture.”
Seeking truth from facts
His fellow Sinologists—who ran the gamut from ignorance of reality to sympathy for Mao to a craven desire to avoid rocking the boat—were aghast. Leave the politics to the journalists, advised one well-meaning mentor, and focus on studying the classics. But he couldn’t. To talk about China, he said, meant talking about the everyday reality experienced by its people. He wrote with contempt of “China experts” who would be horrified at the thought of travelling by bus rather than officially organised car, or of eating with the common folk at a noodle stall.
Eventually, of course, his real identity was exposed. That did not stop him; he was stubborn and principled, and besides, he was right. Being right had not even required any particularly special effort: before his stint at the embassy he had not set foot in China in years. All it took, he said, was listening to Chinese friends, keeping up with dispatches from trusted sources and reading the official press with a sceptical eye—and the courage to recognise the uncomfortable truth that, whatever romance it may have once possessed, Mao’s revolution had become a nightmare.
Mr Ryckmans predicted that, one day, the chaos of the Mao years would fade and that the Communist Party’s totalitarian grip would ease. Sure enough, these days even the party admits that the Cultural Revolution was a “disaster”, and that millions died in the famine that followed the Great Leap Forward, an earlier attempt at collectivisation. But the fundamental nature of the regime, he said, would not change. He was right about that, too. Deng Xiaoping, Mao’s eventual successor, brought prosperity by liberalising the economy. In today’s China a little criticism is even tolerated—but only if it does not seriously threaten the party’s rule.
The Ecocomist 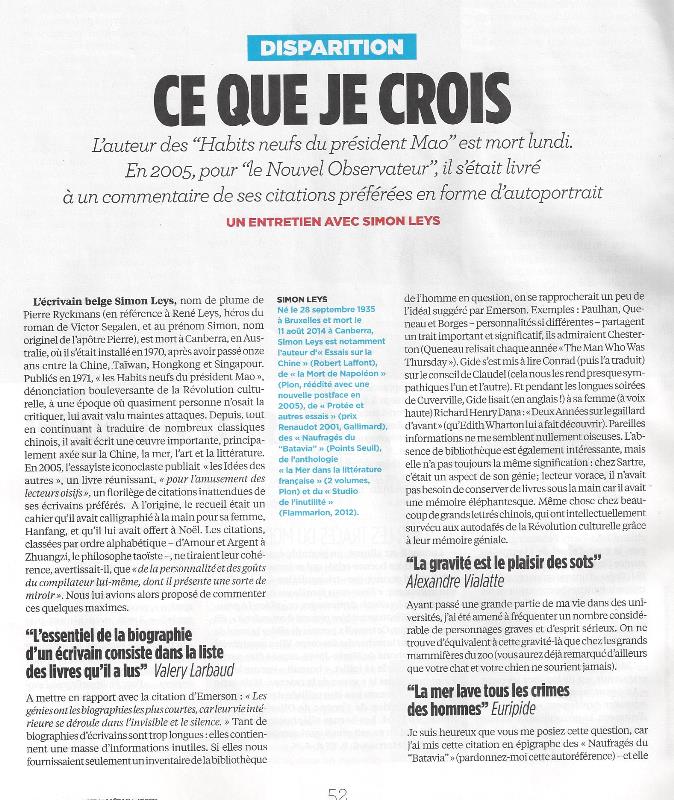 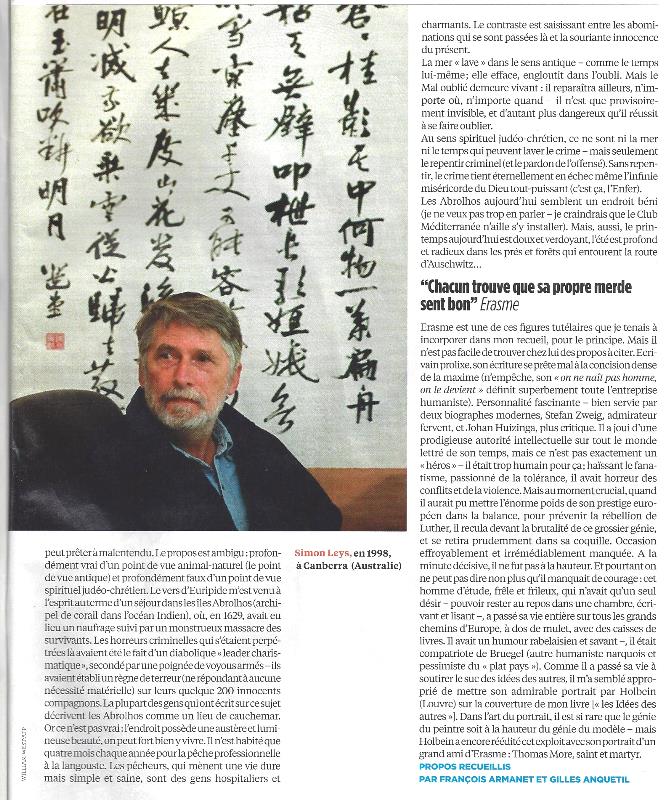 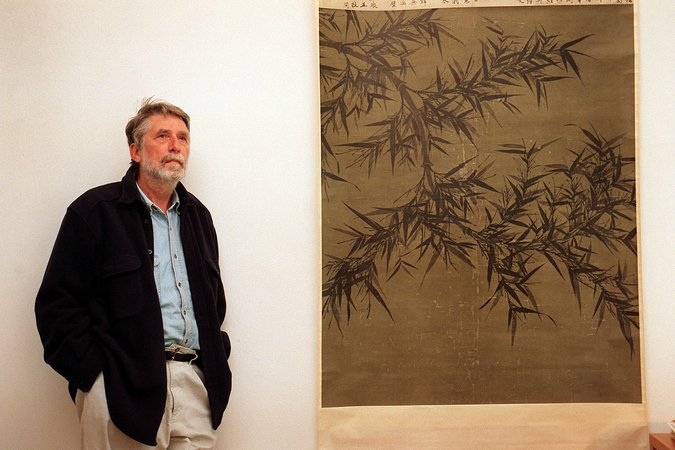 Pierre Ryckmans, who used the pen name Simon Leys, first traveled to China as a student in 1955. His once romantic view of China dissipated when he learned of the Cultural Revolution.

The Man Who Got It Right
NYRB đọc
The Hall of Uselessness: Collected Essays
by Simon Leys