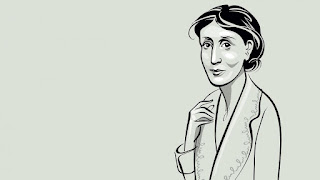 Books Notes on a Voice


“I enjoyed talking to her, but thought nothing of her writing. I considered her a beautiful little knitter.” So wrote Edith Sitwell of an afternoon she spent with Virginia Woolf. Not much of Woolf’s knitting survives, but nine novels and dozens of short stories, essays and diaries do.
Woolf is now upheld as one of the founding figures of modernism. Born in 1882 into an artistic household in Kensington, she grew up surrounded by writers, which gave her a sense that she had as much right to put pen to paper as any of the literati who passed through her family drawing room.
She is often placed in the same funereal category as Sylvia Plath: brilliant but tortured female writers who killed themselves, in Woolf’s case by weighing down her pockets with stones and walking into a river. Yet despite depressions she had a tremendous sense of fun: she and five friends once secured a royal tour of the HMS Dreadnought by disguising themselves as the Prince of Abyssinia and his entourage. Flippant and sombre, lyrical and curt: Woolf’s voice is mercurial, and she delights in pulling the rug from under her readers’ feet.


Key Decision  Founding the Hogarth Press with her husband, Leonard. This freed her to produce work without having to bend to the whims of publishers. In a marginal note in an early draft of “Mrs Dalloway”, she declares: “I will write anything I want to write.”
Strong points  1) Teasing. Woolf gives with one hand and takes with the other, offering tempting glimpses of her characters’ inner lives. “As for following him back to his rooms, no – that we won’t do,” reads a passage in “Jacob’s Room”. 2) Suspicion of words. Language was a fickle friend to Woolf, and her characters struggle to say what they mean. The eponymous hero(ine) of Woolf’s gender-bending novel “Orlando” suffers particularly: “ransack the language as he might, words failed him”. 3) Ignoring the clock. Woolf thought that chronological storytelling was not only boring but false. Instead, she flits between present and past, building up her characters as composites of memories and experiences.
Golden rule  Fight back. “Lock up your libraries if you like,” she writes in “A Room of One’s Own”, “but there is no gate, no lock, no bolt that you can set upon the freedom of my mind.” Virginia Woolf’s pen is a battering ram against the doors closed to women. She loathed “any dominion of one over another”.
Role Model  Painters. They populate her novels and her personal life. As a result her descriptions are often chromatically vivid, such as this from “Jacob’s Room”: “the Scilly Isles were turning bluish; and suddenly blue, purple, and green flushed the sea; left it grey; struck a stripe which vanished.” She admired the painter’s ability to stand back and take in their work as a whole, and even took to writing standing up at a desk-cum-easel so that she could do the same.
Favourite trick  Ventriloquism. Woolf was an exponent of the “free indirect style”, whereby the narrator inhabits the voice of the character. In “Mrs Dalloway”, for instance, the following lines are attributed to the narrator, but they are unmistakably Clarissa’s thoughts: “Hugh’s socks were without exception the most beautiful she had ever seen — and now his evening dress. Perfect!” As J. Hillis Miller put it, the narrator is a function of the character’s thoughts in Woolf’s writing, not the other way around – “they think therefore I am.”
Typical sentence  “All the same, that one day should follow another; Wednesday, Thursday, Friday, Saturday; that one should wake up in the morning; see the sky; walk in the park; meet Hugh Whitbread; then suddenly in came Peter; then these roses; it was enough.”