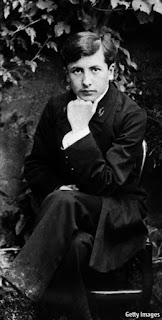 The girl at the Grand Palais

The adolescent obsession that inspired an influential yet neglected French classic

SAL PARADISE, hero of Jack Kerouac’s “On the Road”, carries only one book on his three-year travels across America. On a Greyhound bus to St Louis he produces a second-hand copy of “Le Grand Meaulnes”, stolen from a Hollywood stall. Entranced by the Arizona landscape, he decides not to read it after all.
Such is the fortune of Alain-Fournier’s story, one of France’s most popular novels, in the English-speaking world. Much loved yet little read, for almost a century this strange, earnest and inconsolable novel has haunted the fringes of fiction. Henry Miller venerated its hero; F. Scott Fitzgerald borrowed its title for “The Great Gatsby” (and some critics think Fournier’s main characters were models for Nick Carraway, Fitzgerald’s narrator, and his lovelorn pal). John Fowles claimed it informed everything he wrote. “I know it has many faults,” he sighed, as if trying to shake the obsession, “yet it has haunted me all my life.”

From Rochefort to Verdun

Both parties hoped that the meeting in Rochefort would cure Fournier’s fixation. Back in Paris he admitted the clandestine trip to his lover Simone, prompting a bitter fight and passionate reconciliation that saw Fournier vow to forsake his adolescent obsession. Yet Yvonne continued to write to him. Fournier sent her copies of La Nouvelle Revue Française, in which “Le Grand Meaulnes” was then being serialised. She sent them back with annotations, which he assimilated into the final draft. In September 1913 she sent—and then swiftly retracted, through an intermediary—a more personal letter, the content of which is now lost.
That autumn Fournier bounced between two married women. Simone proclaimed her love for him but refused to leave her husband; Yvonne declared herself unobtainable but affected the reverse. A dilemma that would once have paralysed Fournier now made him decisive. In October he sent Yvonne an advance copy of the final, complete version of “Le Grand Meaulnes” (and a second for her husband). The dedication he scribbled inside—dated June 1st 1905 to October 25th 1913—was a celebration of his long infatuation with her, and also its memorial.
When war came the following summer, Simone agreed to divorce her husband and marry Fournier once the conflict was over. But privately Fournier did not expect to return from the battlefield. The deaths of many friends had already convinced him that his own life might be short. In 1912 a former schoolmate had overdosed on morphine. Another, refused permission to marry his fiancée, shot himself in the face at the age of 24.
Marching to the front, Fournier started to clean up his past. He asked Marguerite Audoux, a novelist and friend, to burn the two long letters he had written to her about his trip to Rochefort. He wrote to his sister to ask her to destroy his papers if he died, except for those concerning Simone. To her, he penned a more reassuring note: “Here’s to the happiness that awaits us and the children we shall have!”


During the early weeks of the first world war, before the trenches were dug, army lines were fluid and skirmishes frequent. On September 22nd 1914 Lieutenant Fournier led his company into woods south of Verdun. French soldiers patrolling nearby came upon a German field hospital; Fournier’s men joined the firefight that followed.
The few who escaped the battle could not say what had happened to the lieutenant. French authorities declared him dead, but his body was not recovered. For a month his mother, sister and lover sent increasingly desperate letters to the front. In 1918 they waited vainly for him to emerge, scrawny but alive, from some German camp. Later attempts to determine his fate returned grisly results. A German report—compiled in the 1920s but discovered decades afterwards—alleged that French survivors of the action had immediately been executed for attacking medical auxiliaries.
In 1991 researchers found his body, and those of his men, buried where they fell. The final photo of Henri Fournier is gruesome. Twenty-one skeletons lie in a shallow grave: two rows of ten, with one flung across the top. Fournier’s is in a corner, identifiable by its uniform. His skull has fallen to one side, his jaw is agape. He had been shot in the chest, suggesting he died in battle.

In the last year of his life Fournier had shaken off his daydreams. In death they defined him. In 1913 “Le Grand Meaulnes” had narrowly missed out on the Prix Goncourt—France’s most prestigious literary award—but the war propelled the novel to far greater fame. Many of those who had seen and survived the savagery appreciated Fournier’s elegy to innocence.
Most of his English-speaking readers come across the book at school, but he has become less well-known as languages, French in particular, have fallen out of fashion. Degree courses skip over the novel, perhaps because it doesn’t fit into any movement or genre. “It comes from nowhere and leads nowhere,” says Patrick McGuinness of Oxford University. “It is its own monument.”
Its ever-changing English titles do not help: “Big Meaulnes”, “The Great Meaulnes” and “The Magnificent Meaulnes” have all come and gone. Editions that omit the hero’s vowel-heavy name, such as “The Wanderer” and “The Lost Estate”, have had more success, though many publishers simply retain the French title. The author’s unusual pen name is another disadvantage. Alain-Fournier—an oddly hyphenated semi-pseudonym adopted to avoid confusion with a racing driver—was misspelled by an editor the first time Fournier used it, and is still often mangled.
Some think this creeping obscurity deserved, finding “Le Grand Meaulnes” mawkish and melodramatic, its plot contrived. Publishers play up the sentimentality with covers depicting pastoral scenes and teenage boys. That is a fair summary of the story’s first part, but a poor illustration of the oddness of the rest.

Fowles, who called the book “the greatest novel of adolescence in European literature”, suggested that its detractors dislike being reminded of “qualities and emotions they have tried to eradicate from their own lives”. Fitzgerald camouflaged Fournier’s themes with a more sophisticated setting: Gatsby is no less juvenile than Meaulnes, but age and wealth make him seem more worldly. Happily, a small group of contemporary novelists still wear Fournier’s influence proudly. The young hero of “The Way I Found Her”, by Rose Tremain, acquires a copy of “Le Grand Meaulnes” from a Paris bouquiniste, who “looked quite miserable to part with it”. A mental patient in David Mitchell’s “Black Swan Green” relives the novel each day.


Critics have now puzzled out most of the book’s mysteries. The bleak final photo of Fournier solved his disappearance. The true identity of Yvonne de Quiévrecourt was revealed after her death. All the same, little is really known about the girl at the Grand Palais, who was both worshipped and artistically exploited by Fournier. She remained silent about her role in one of France’s most famous novels; by the end of her life she could not remember it herself. It fell to her husband to tell their children the story, as its fame grew around them.
In 1939 she apologised for not visiting Fournier’s sister, then guardian of his estate. “Far better for me to remain within the aura in which your brother enclosed me,” she wrote. Perhaps she was wise to stay as untouchable as the heroine she inspired. Probably no mere mortal could embody all the fascination and yearning that Fournier captures in “Le Grand Meaulnes”.