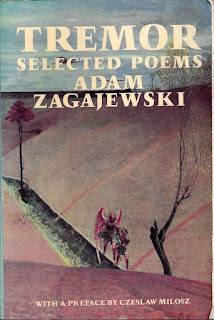 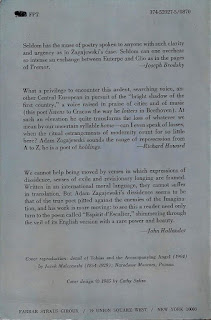 Bài Intro của Milosz mà chẳng tuyệt sao:
Zagajewski's poetry is a homage paid to our Central Europe and to the unity of Europe artificially divided into "the West" and "the East," much as is the prose of Milan Kundera, of George Konrad, or of Danilo Kis.
Gấu sẽ từ từ dịch mấy bài thơ sau

“In the Beauty Created by Others”


Only in the beauty created
by others is there consolation,
in the music of others and in others' poems.
Only others save us,
even though solitude tastes like
opium. The others are not hell,
if you see them early, with their
foreheads pure, cleansed by dreams.
That is why I wonder what
word should be used, "he" or "you." Every "he"
is a betrayal of a certain "you" but
in return someone else's poem
offers the fidelity of a sober dialogue.


What a joy to see a major poet emerging from a hardly differentiated mass of contemporaries and taking the lead in the poetry of my language, a living proof that Polish literature is energy incessantly renewed against all probabilities! Born in 1945, Zagajewski belonged to the angry "generation of 1968" and started by satirizing both in his verse and in his prose the surreal character of the totalitarian state. While mocking the official language, he gradually developed a taste for expressing the political opposition of his generation through a "naked" speech practically stripped of metaphors. I discovered him then and praised the freshness of his style, not expecting that it marked just a phase in his evolution. For soon he left behind that poetry of political commitment-noble-minded, but often one-dimensional-and embarked upon a new adventure, a search in a labyrinth where meditation on the flow of time brings together the historical and the metaphysical. His poems have been acquiring a more and more sumptuous texture, and now he appears to me as a skillful weaver whose work is not unlike Gobelin tapestries where trees, flowers, and human figures coexist in the same pattern. That rich and complex world re-created and transformed by art is for him not a place of escape. On the contrary, it is related in a peculiar way to the crude reality of our century, even if it is on the other side of "smooth water, an indifferent wave." Zagajewski's poetry is a homage paid to our Central Europe and to the unity of Europe artificially divided into "the West" and "the East," much as is the prose of Milan Kundera, of George Konrad, or of Danilo Kis. This unity is symbolized by the cities in which his life unfolded. He cultivates the legend of the city of his birth, Lvov, romantic and international; he grew up in Cracow and there studied philosophy at the six-hundred-year-old university; he, like several generations of the intelligentsia, was attracted by Vienna, a cultural center. Those places nourished his imagination and enabled him to converse with mythic European figures, philosophers, painters, and composers of the past. He is not disinherited, for he has found his home in the common heritage ever present in the very art and architecture that surrounded him in his youth. Judging by the steady increase of his creative power in the last years, his migration to Paris, where he has been living since 1981, did not interrupt, but rather guaranteed, the continuity of his work by adding distance and perspective. As I read him, I am inclined to apply his own words to my feeling of wonder:
Only in the beauty created
by others is there consolation.
Berkeley, California
July 1985
Czeslaw Milosz


Also in death we are going to live,
only in a different way, delicately, softly,
dissolved in music;
one by one called out to the corridor,
lonely and yet in a group,
like schoolmates from the same class
which extends beyond the Ural Mountains
and reaches the Quaternary. Released
from unending conversation on politics,
open and candid, at ease, even though
shutters are being closed with a bang
and hail will rattle on the windowsill
its Turkish march, dashing,
as usual. The world of appearances won't fade away
at once, for a long time it will continue
to grumble and curl like a wet
page thrown into the fire. The quest for perfection
will find fulfillment casually, it will bypass
all obstacles just as the Germans
learned how to bypass the Maginot Line. Paltry
things, forgotten, kites made of the thinnest
paper, brittle leaves from past autumns,
will recover their immortal dignity and the systems,
big and victorious, will wither like a giant's sex.
No longing anymore. It will overtake
itself, amazed that it chased for so long
its arctic shadow. And we will be no more,
not having learned yet
how to live at such an altitude.

“There Will Be a Future”


There will be rain, there will be feasts, there
will be bonfires, chestnut husks will crack,
there will be shouts, someone will hide in the bushes,
someone will trip over a cherrystone,
a smell of gas and lilacs in the air.
There will be laughter, there will be cries, prayers, demure
and silent lies, there will be a future,
only you will stay here, in this second-
class waiting room at the railroad station, dark with
cigar smoke, under the portrait of the Austrian Emperor.

"To the memory of Helmut Kajzar"


We walked very slowly down the concrete
slabs near the Olympic Stadium
in Berlin, where the black star
of Jesse Owens had flamed in that prehistoric
time, and the German air
had screamed. I wanted to laugh,
I couldn't believe you could walk
so slowly in the place he had run so fast;
to walk in one direction, but to look
in another, like the figures in Egyptian
reliefs. And yet we were walking that
way, bound with the light string
of friendship.
Two kinds of deaths circle about us.
One puts our whole group to sleep,
takes all of us, the whole herd.
Later it makes long speeches to substantiate
the sentence. The other one is wild, illiterate,
it catches us alone, strayed,
we animals, we bodies, we the pain,
we careless and uneducated.
We worship both of them in two religions
broken by schism. That scar
divided us sometimes when I had
forgotten: we have two deaths,
and one life.
Don't look back when you hear
my whisper. In the huge crowd of Greeks,
Egyptians, and Jews, in that fertile
generation turned to ashes, you walk straight
ahead, as then, unhurried,
alone.
The walls are not tight, windows open
at night to the rain, to the songs of stars
muffled by distance. But
every moment lasts eternally, becomes
a point, a haven, an envelope of emotion.
Every thought is a light coin which
rolls, in its shy secretive
being, into a song, into a painting. Every joy,
even the nonexistent one, leaves a transparent trace. Frost
kisses the pane because it can't get into the room.
This is how a new country arises,
built by us as if by mere chance,
constructed for the future, going down, in tunnels,
the bright shadow of the first country, an unfinished
house.