V.S. Naipaul, Poet of the Displaced 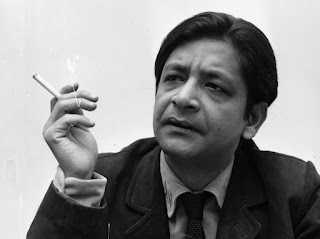 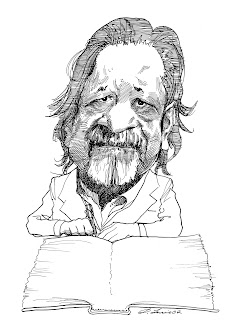 V.S. Naipaul’s fastidiousness was legendary. I met him for the first time in Berlin, in 1991, when he was feted for the German edition of his latest book. A smiling young waitress offered him some decent white wine. Naipaul took the bottle from her hand, examined the label for some time, like a fine-art dealer inspecting a dubious piece, handed the bottle back, and said with considerable disdain: “I think perhaps later, perhaps later.” (Naipaul often repeated phrases.)

This kind of thing also found its way into his travel writing. He could work himself up into a rage about the quality of the towels in his hotel bathroom, or the slack service on an airline, or the poor food at a restaurant, as though these were personal affronts to him, the impeccably turned-out traveler.

Naipaul was nothing if not self-aware. In his first travel account of India, An Area of Darkness (1964), he describes a visit to his ancestral village in a poor, dusty part of Uttar Pradesh, where an old woman clutches Naipaul’s shiny English shoes. Naipaul feels overwhelmed, alienated, presumed upon. He wants to leave this remote place his grandfather left behind many years before. A young man wishes to hitch a ride to the nearest town. Naipaul says: “No, let the idler walk.” And so, he adds, “the visit ended, in futility and impatience, a gratuitous act of cruelty, self-reproach and flight.”

It is tempting to see Naipaul as a blimpish figure, aping the manners of British bigots; or as a fussy Brahmin, unwilling to eat from the same plates as lower castes. Both views miss the mark. Naipaul’s fastidiousness had more to do with what he called the “raw nerves” of a displaced colonial, a man born in a provincial outpost of empire, who had struggled against the indignities of racial prejudice to make his mark, to be a writer, to add his voice to what he saw as a universal civilization. Dirty towels, bad service, and the wretchedness of his ancestral land were insults to his sense of dignity, of having overcome so much.

These raw nerves did not make him into an apologist for empire, let alone for the horrors inflicted by white Europeans. On the contrary, he blamed the abject state of so many former colonies on imperial conquest. In The Loss of Eldorado (1969), a short history of his native Trinidad, he describes in great detail how waves of bloody conquest wiped out entire peoples and their cultures, leaving half-baked, dispossessed, rootless societies. Such societies have lost what Naipaul calls their “wholeness” and are prone to revolutionary fantasies and religious fanaticism.

Wholeness was an important idea to Naipaul. To him, it represented cultural memory, a settled sense of place and identity. History was important to him, as well as literary achievement upon which new generations of writers could build. It irked him that there was nothing for him to build on in Trinidad, apart from some vaguely recalled Brahmin rituals and books about a faraway European country where it rained all the time, a place he could only imagine. England, to him, represented a culture that was whole. And, from the distance of his childhood, so did India. (In fact, he knew more about ancient Rome, taught by a Latin teacher in Trinidad, than he did about either country.)

When he finally managed to go to India, he was disappointed. India was a “wounded civilization,” maimed by Muslim conquests and European colonialism. He realized he didn’t belong there, any more than in Trinidad or in England. And so he sought to find his place in the world through words. Books would be his escape from feeling rootless and superfluous. His father, Seepersad Naipaul, had tried to lift himself from his surroundings by writing journalism and short stories, which he hoped, in vain, to publish in England. Writing, to father and son, was more than a profession; it was a calling that conferred a kind of nobility.

Naipaul’s most famous novel, A House for Mr. Biswas (1961), drew on the father’s story of frustrated ambition. By going back into the world of his childhood, he found the words to create his own link to that universal literary civilization. He often told interviewers that he only existed in his books.

If raw nerves made him irascible at times, they also sharpened his vision. He understood people who were culturally dislocated and who tried to find solace in religious or political fantasies that were often borrowed from other places and ineptly mimicked. He described such delusions precisely and often comically. His sense of humor sometimes bordered on cruelty, and in interviews with liberal journalists it could take the form of calculated provocation. But his refusal to sentimentalize the wounds in postcolonial societies produced some of his most penetrating insights.

My favorite book by Naipaul is not A House for Mr. Biswas, or the later novel A Bend in the River (1979), his various books on India, or even his 1987 masterpiece The Enigma of Arrival, but a slender volume entitled Finding the Center (1984). It consists of two long essays, one about how he learned to become a writer, how he found his own voice, and the other about a trip to Ivory Coast in 1982. In the first piece, written out of unflinching self-knowledge, he gives a lucid account of the way he sees the world, and how he puts this in words. He travels to understand himself, as well as the politics and histories of the countries he visits. Following random encounters with people who interest him, he tries to understand how people see themselves in relation to the world they live in. But by doing so, he finds his own place, too, in his own inimitable words.

The second part of Finding the Center, called “The Crocodiles of Yamassoukro,” is a perfect example of his methods. It is a surprisingly sympathetic account of a messed-up African country, filled with foreigners as well as local people wrapped up in a variety of self-told stories, some of them fantastical, about how they see themselves fitting in. African Americans come in search of an imaginary Africa. A black woman from Martinique escapes in a private world of quasi-French snobbery. And the Africans themselves, in Naipaul’s vision, have held onto a “whole” culture under a thin layer of false mimicry. This culture of ancestral spirits comes alive at night, when the gimcrack modernity of daily urban life is forgotten.

Being in Africa reminds him of his childhood in Trinidad, when descendants of slaves turned the world upside down in carnivals, in which the oppressive white world ceased to exist and they reigned as African kings and queens. It is an oddly romantic vision of African life, this idea that something whole lurks under the surface of a half-made, borrowed civilization. Perhaps it is more telling of Naipaul’s own longings than of the reality of most people’s lives. If he is always clear-eyed about the pretentions of religious fanatics, Third World mimic men, and delusional political figures, his idea of wholeness can sound almost sentimental.

I remember being in a car with Naipaul one summer day in Wiltshire, England, near the cottage where he lived. He told me about his driver, a local man. The driver, he said, had a special bond with the rolling hills we were passing through. The man was aware of his ancestors buried under our feet. He belonged here. He felt the link with generations that had been here before him: “That is how he thinks, that is how he thinks.”

I am not convinced at all that this was the way Naipaul’s driver thought. But it was certainly the way he thought in the writer’s imagination. Naipaul was our greatest poet of the half-baked and the displaced. It was the imaginary wholeness of civilizations that sometimes led him astray. He became too sympathetic to the Hindu nationalism that is now poisoning India politics, as if a whole Hindu civilization were on the rise after centuries of alien Muslim or Western despoliations.

There is no such thing as a whole civilization. But some of Naipaul’s greatest literature came out of his yearning for it. Although he may, at times, have associated this with England or India, his imaginary civilization was not tied to any nation. It was a literary idea, secular, enlightened, passed on through writing. That is where he made his home, and that is where, in his books, he will live on.

Ian Buruma is the author of numerous books, including Murder in Amsterdam: The Death of Theo Van Gogh and the Limits of Tolerance, Year Zero: A History of 1945, and, most recently, A Tokyo Romance.