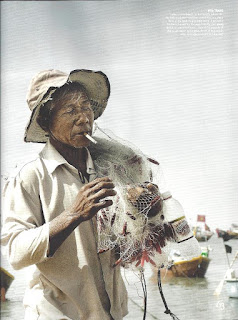 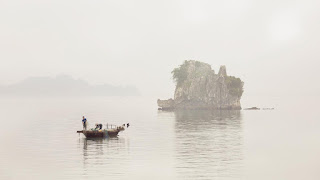 Few lands are so defined by their seashore as is Vietnam. A long, thin strip of a country, just 30 miles wide at its narrowest point, it has 2,000 miles of coastline from the north-eastern border with China to the south-western one with Cambodia. Over 5% of the workforce are employed in fishing. When hundreds of thousands fled after the end of the Vietnam war in 1975, they did so as boat people. For centuries, Vietnamese painting has been fascinated by the beauty of its coastal waters.

The photographer Ian Winstanley followed the coast from Ho Chi Minh City in the south to the capital, Hanoi, in the north, by train, boat and, for 400km, by bicycle. He was struck by the spectacular scenery, the serenity and the warmth of the welcome he received when he pedalled through the villages. But something else drew his attention: the uneasy sense among those living on Vietnam’s shoreline that their sea is under threat.

Unlikely as it seems from these pictures, whose milky palette appears to echo the tranquillity they capture, this sea is a cockpit of regional tensions. The clue is in the name. For Vietnam, it is the “East Sea”. The Philippines calls part of it the “West Philippine Sea”. But China calls it the “South Sea” and it is better known around the world as the “South China Sea”. China and, for historical reasons, Taiwan, claim sovereignty over almost the entire sea, including parts claimed by Vietnam and the Philippines.

Mostly this is a dispute waged in maps, newspaper columns and dry diplomatic forums. Sometimes, though, it flares up: in 1988 more than 60 Vietnamese navy sailors died losing a skirmish with China over part of the Spratly Islands, in the sea’s south-east. Since then, overt conflict has been avoided, beyond occasional scuffles between fishermen.

But in the past couple of years the terms of the conflict have been rewritten by China. Last year it sent an oil-rig to drill in waters that Vietnam regarded as its own. And over the past 18 months, it has been engaged in a frenzied construction spree, expanding seven tiny islands, rocks and reefs it controls by filling in the sea to create artificial territory capable of sustaining not just human habitation, but military activity.

This is of course alarming to the other littoral states. But it has also become one of the big disagreements roiling relations between China and America. Of the 80,000 or so ships, carrying one-third of global seaborne trade, that pass through the Strait of Malacca each year, most also ply the South China Sea. Their security has been safeguarded by America’s dominance of the western Pacific. Now China seems to be challenging that.

For many Vietnamese, this opens a new front in a centuries-old conflict. Despite the history of French colonial occupation and the anti-American war, Vietnamese nationalism is defined by the struggle to retain or regain independence from its overbearing northern neighbour. The oil-rig incident led to anti-Chinese rioting; millions routinely log on to the internet to urge the government to take a firm stand against perceived Chinese slights. These days, Vietnam is even cosying up to America as a strategic partner. But, for the fishermen, as Winstanley has documented, their life is still defined by the rhythms of the tides and the shrinking bounty of the disputed waters. ~ simon long