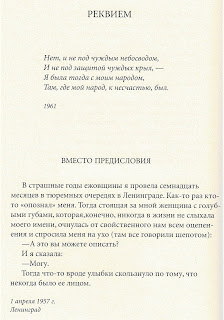 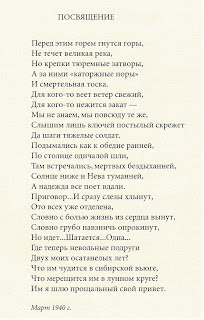 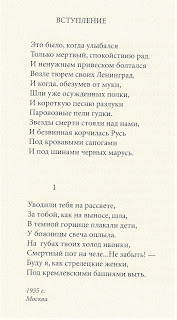 That was when the ones who smiled

Were the dead, glad to be at rest.

Swung from its prisons.

And when, senseless from torment,

And the short songs of farewell

Were sung by locomotive whistles.

The stars of death stood above us

And under the tires of the Black Marias.

They led you away at dawn,

In the dark front room the children were crying,

By the icon shelf the candle was dying.

On your lips was the icon's chill.

The deathly sweat on your brow ... Unforgettable! —

I will be like the wives of the Streltsy,

Howling under the Kremlin towers. 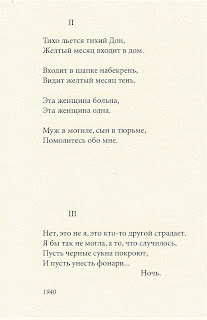 Yellow moon slips into a home.

He slips in with cap askew,

He sees a shadow, yellow moon.

This woman is ill,

This woman is alone,

Husband in the grave, son in prison,

Say a prayer for me.

No, it is not I, it is somebody else who is suffering.

I would not have been able to bear what happened,

Let them shroud it in black,

And let them carry off the lanterns ... 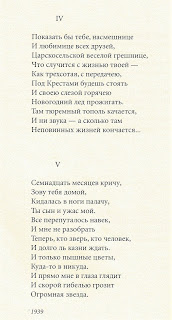 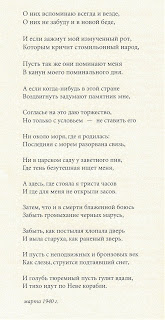 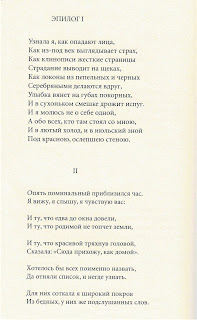 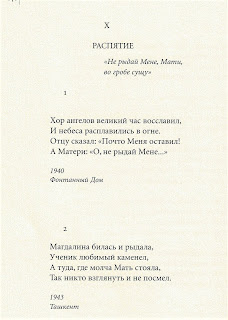 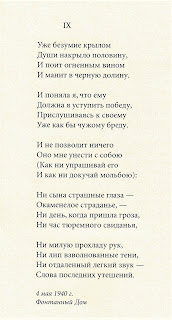 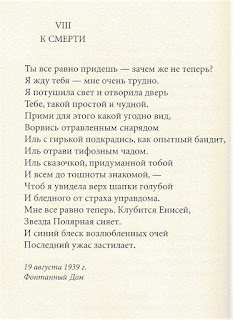 You should have been shown, you mocker,

Minion of all your friends,

What would happen in your life —

How three-hundredth in line, with a parcel,

You would stand by the Kresty prison,

Burning through the New Year's ice.

Over there the prison poplar bends,

And there’s no sound — and over there how many

For seventeen months I've been crying out,

I flung myself at the hangman's feet,

You are my son and my horror.

Everything is confused forever,

And it’s not clear to me

And how long before the execution.

And there are only dusty flowers,

And the chinking of the censer, and tracks

From somewhere to nowhere.

And staring me straight in the eyes,

Is an enormous star.

The light weeks will take flight,
I won't comprehend   what  happened.
Just as the white nights
Stared at you, dear son, in prison,
So they are staring again,
With  the burning eyes of a hawk,
Talking about your lofty cross,
And about  death.


And the stone word  fell
On  my  still-living breast.
Never  mind, I was ready.
I will manage somehow.

Today  I have so much to do:
I must kill memory once  and for all,
I must turn  my soul to stone,
I must learn to live again —

Unless  ... Summer's ardent rustling
Is like a festival outside my window.
For a long time I've foreseen this
Brilliant day, deserted house.

You will come in any case — so why not now?

I am waiting for you — I can't stand much more.

I've put out the light and opened the door

For you, so simple and miraculous.

So come in any form you please,

Burst in as a gas shell

Or, like a gangster, steal in with a length of pipe,

Or poison me with typhus fumes.

Or be that fairy tale you've dreamed up,

So sickeningly familiar to everyone —

In which I glimpse the top of a pale blue cap

And the house attendant white with fear.

And the final horror dims

The blue luster of beloved eyes.

My soul with its wing,

And makes it drunk with fiery wine

And beckons toward the black ravine.

That I must give in,

Raving as if it were somebody else.

And it does not allow me to take

Anything of mine with me

(No matter how I plead with it,

No matter how I supplicate):

Not the terrible eyes of my son —

Not the day of the terror,

Not the hour I met with him in prison,

Not the sweet coolness of his hands,

Not the trembling shadow of the lindens,

Not the far-off, fragile sound —

Of the final words of consolation.

"Do not weep for Me, Mother,

A choir of angels sang the praises of that momentous hour,

And the heavens dissolved in fire.

To his Father He said: "Why hast Thou forsaken me!"

The beloved disciple turned to stone,

But where the silent Mother stood, there

No one glanced and no   one would have dared.

I learned how faces fall,

How terror darts from under eyelids,

Of stiff cuneiform on cheeks,

How locks of ashen-blonde or black

And fear trembles in a dry laugh.

And I pray not for myself alone,

But for all those who stood there with me

In cruel cold, and in July's heat,

At that blind, red wall.

Once more the day of remembrance draws near.

The one they almost had to drag to the window,

And the one who tramps her native land no more,

And the one who, tossing her beautiful head,

But the list has been confiscated and is nowhere to be found.

I have woven a wide mantle for them

From their meager, overheard words.

I will remember them always and everywhere,

I will never forget them no matter what comes.

And if they gag my exhausted mouth

Through which a  hundred million scream,

Then may the people   remember me

On the eve of my remembrance   day.

And if ever in this country

They decide to erect a monument to me,

I consent to that honor

Under these conditions — that it stand

Neither by the sea, where I was born:

My last tie with the sea is broken,

Nor in the tsar's garden near the cherished pine stump,

Where an inconsolable shade looks for me,

But here, where I stood for three hundred hours,

And where they never unbolted the doors for me.

This, lest in blissful death

I forget the rumbling of the Black Marias,

And an old woman   howled like a wounded animal.

From my motionless lids of bronze,

And a prison dove coo in the distance,

And the ships of the Neva sail calmly on. 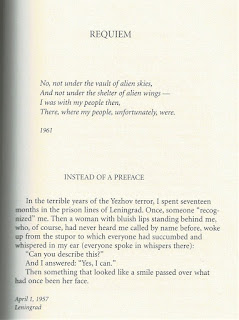 August 8, 2022
Bữa nay, khởi sự post bản tiếng VIệt. Sẽ dùng bản tiếng Anh của Judith, là chính, mấy bản khác coi như phụ.
Ngoài ra, còn viện tới Bác Gúc.
Cảm ơn Bác Gúc!
REQUIEM
No, not under the vault of alien skies,
And not under the shelter of alien wings —
I was with my people then,
There, where my people, unfortunately, were.
1961
*
INSTEAD OF A PREFACE
In the terrible years of the Yezhov terror, I spent seventeen months in the prison lines of Leningrad. Once, someone "recognized" me. Then a woman with bluish lips standing behind me,
who, of course, had never heard me called by name before, woke up from the stupor to which everyone had succumbed and whispered in my ear (everyone spoke in whispers there):
"Can you describe this?"
And I answered: "Yes, I can."
Then something that looked like a smile passed over what
had once been her face.
April 1, 1957
Leningrad
Anna Akhmatova
Trans. Judith
***
REQUIEM
No, not under a foreign heavenly-cope, and
Not canopied by foreign wings —
I was with my people in those hours,
There where, unhappily, my people were.
In the fearful years of the Yezhov terror I spent seven-
teen months in prison queues in Leningrad. One day
somebody 'identified' me. Beside me, in the queue, there
was a woman with blue lips. She had, of course, never
heard of me; but she suddenly came out of that trance
so common to us all and whispered in my ear (everybody
spoke in whispers there): Van you describe this?' And
I said: 'Yes, I can.' And then something like the shadow
of a smile crossed what had once been her face.
1 April 1957, Leningrad
Trans. D.M. Thomas
Kinh Cầu
"Không, không phải dưới bầu trời xa lạ,
Không phải dưới đôi cánh quyền lực xa lạ, -
Tôi ở đó, giữa đồng bào của tôi
Bất hạnh thay,
Ở."
\
Thay vì lời đề tựa
Vào những năm khủng khiếp dười thời Trùm mật vụ Yezhov, tôi trải qua 17 tháng xếp hàng cùng những thân nhân khác, trước nhà tù Leningrad. Một lần, có 1 người "nhận ra" tôi. Một người đàn bà, môi tái nhợt, đứng phía sau, chắc chắn chưa từng nghe nói đến tên tôi trước đó, bất thình lình tách ra khỏi hàng người quá quen thuộc với tất cả chúng tôi, và thì thầm vô tai tôi (mọi người đều nói trong thì thầm như thế):
-Liệu bà có thể diễn tả nó?
Tôi nói:
Tôi có thể
Và rồi thì, có một diều gì, như thể cái bóng của 1 nụ cười, thoáng qua, trên một nơi có thời là khuôn mặt của người đàn bà. 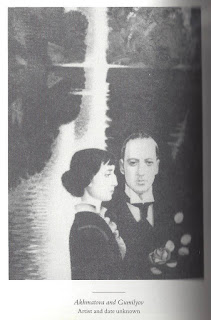 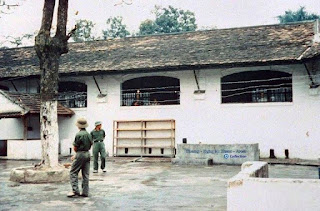 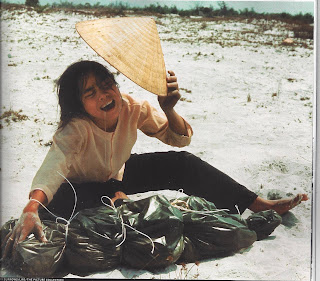