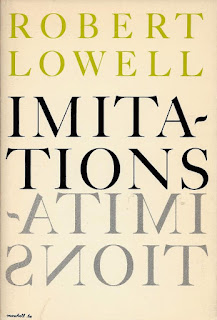 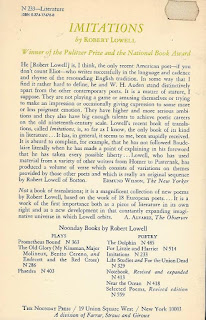 Now colder shadows ... Who'll turn back the clock?
Goodbye bright summer's brief too lively sport!
The squirrel drops its acorn with a shock,
cord-wood reverberates in my cobbled court.

Winter has entered in my citadel:
hate, anger, fear, forced work like splitting rock,
and like the sun borne to its northern hell,
my heart's no more than a red, frozen block.

Shaking, I listen for the wood to fall;
building a scaffold makes no deafer sound.
Each heart-beat knocks my body to the ground,
like a slow battering ram crumbling a wall.

I think this is the season's funeral,
some one is nailing a coffin hurriedly.
For whom? Yesterday summer, today fall-
the steady progress sounds like a goodbye.
Baudelaire: Chant d'automne.

This book is partly self-sufficient and separate from its .sources, and should be first read as a sequence, one voice running through many personalities, contrasts and repetitions. I have hoped somehow for a whole, to make a single volume, a small anthology of European poetry. The dark and against the grain stand out, but there are other modifying strands. I have tried to keep something equivalent to the fire and finish of my originals. This has forced me to do considerable re-writing.
Boris Pasternak has said that the usual reliable translator gets the literal meaning but misses the tone, and that in poetry tone is of course everything. I have been reckless with literal meaning, and labored hard to get the tone. Most often this has been a tone, for the tone is something that will always more or less escape transference to another language and cultural moment. I have tried to write alive English and to do what my authors might have done if they were writing their poems now and in America.
Most poetic translations come to grief and are less enjoyable than modest photographic prose translations, such as George Kay has offered in his Penguin Book of Italian Verse. Strict metrical translators still exist. They seem to live in a pure world untouched by contemporary poetry. Their difficulties are bold and honest, but they are taxidermists, not poets, and their poems are likely to be stuffed birds. A better strategy would seem to be the now fashionable translations into free or irregular verse. Yet this method commonly turns out a sprawl of language, neither faithful nor distinguished, now on stilts, now low, as Dryden would say. It seems self-evident that no professor or amateur poet, or even good poet writing hastily, can by miracle transform himself into a fine metricist. I believe that poetic translation-I would call it an imitation-must be expert and inspired, and needs at least as much technique, luck and rightness of hand as an original poem.
My licenses have been many. My first two Sappho poems are really new poems based on hers. Villon has been somewhat stripped; Hebel is taken out of dialect; Hugo's "Gautier" is cut in half. Mallarrné has been unclotted, not because I disapprove of his dense medium but because I saw no way of giving it much power in English. The same has been done with Ungaretti and some of the more obscure Rimbaud.
About a third of "The Drunken Boat" has been left out. Two stanzas have been added to Rilke's "Roman Sarcophagus," and one to his "Pigeons." "Pigeons" and Valery's "Helen" are more idiomatic and informal in my English. Some lines from Villon's "Little Testament" have been shifted to introduce his "Great Testament." And so forth! I have dropped lines, moved lines, moved stanzas, changed images and altered meter and intent.
Pasternak has given me special problems. From reading his prose and many translations of his poetry, I have come to feel that he is a very great poet. But I know no Russian. I have rashly tried to improve on other translations, and have been helped by exact prose versions given me by Russian readers. This is an old practice; Pasternak himself, I think, worked this way with his Georgian poets. I hope I caught something worthy of his all-important tone.
This book was written from time to time when I was unable to do anything of my own. It began some ten years ago when I read a parallel French translation of Rilke's "Orpheus," and felt that a much better job might be done in English. I had long been amazed by Montale, but had no idea how he might be worked until I saw that unlike most good poets-Horace and Petrarch are extremes-he was strong in simple prose and could be made still stronger in free verse.
My Baudelaires were begun as exercises in couplets and quatrains and to get away from the longer, less concentrated problems of translating Racine's Phèdre.
All my originals are important poems. Nothing like them exists in English, for the excellence of a poet depends on the unique opportunities of his native language. I have been almost as free as the authors themselves in finding ways to make them ring right for me.
-ROBERT LOWELL