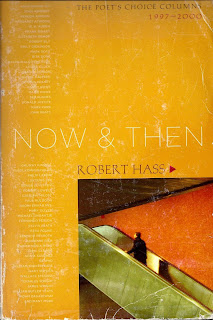 
Anyone who has had a newborn arrive in their life knows how powerful and hard to describe the emotions are. Twentieth-century poets have mostly stayed away from them. They are too frail. They are not mammal grief and rage, even though they can turn into grief and rage. (That's what King Lear is about.) And the example of the tradition of domestic and familial poetry in Victorian America has not encouraged us. It made the subject seem impossible to approach without sentimentality. Language makes the distinction: we speak of anger and desire as "feeling," the tender and uneasy stuff around the helplessness of infants, and the impulse to protect children we call "sentiment." And it's probably well that we do. Because they are frail emotions, and they are capable of turning into something quite savage. Nevertheless it is a deep thing, the wonder (and fear) at the arrival of a newborn child, and the process of-hard to know how else to say it-falling in love that parents go through with this creature given into their care. How do you talk about it?
Daniel Halpern, in his new book "Something Shining" (Knopf), takes the subject on. He's my editor, and an old friend, and a poet I've been reading for twenty years or more. I've always thought of him as a poet on the model of the Roman poet Horace, with a poised and immensely civilized mind for the life we live, its large and small panics and decorums, and a civilized balance in his verse, in which orderliness can sometimes seem sinister and wry, and sometimes seem a gift, the kind of gift social beings can give to one another, like a well-set table. Reading him has, over the years, made for very good company, this intelligence that is reasonably disenchanted, keeps aA eye on the decades as they pass, the telling particulars in the social habits of a generation, its ardors, suavities, and defeats.
And now this book that requires another kind of poise. How do you write about the whole business of becoming a parent, and about the way this attachment, this profound and life-defining tenderness and wonder, grows in us. He goes straight to it, and succeeds, I think. Have a look:

They turn up, no longer nameless,
their bodies clear, so nearly pure
they appear in morning light transparent.

They turn up and one day look at you
for the first time, their eyes sure now
you are one of theirs, surely here to stay.

They turn up wearing an expression of yours,
imitating your mouth, the smile perfected
over years of enduring amusing moments.

They turn up without a past, their fingers,
inexact instruments that examine what carpets
their turf, what they inherit through blood.

They turn up with your future, if not in mind
very much in the explosive story of their genes,
in gesture foreshadowing the what's-to-come.

They turn up with your hair-albeit not much
of it-something in the color, the curl of it
after the bath, its bearing after sleep.

They turn up and we have been waiting,
as they have without knowing. They turn
into this world, keeping their own counsel.

Here's a section from one called "Her Body":

We believe their color makes some kind of difference,
the cast of it played off the color of hair and face.

But it makes no difference, blue or brown,
hazel, green, or gray, pale sky or sand.

When sleep-burdened they'll turn up into her,
close back down upon her sizable will.

But when she's ready for the yet-to-come-
oh, they widen, grow a deep cool sheen

to catch the available light and shine
with the intensity of the newly arrived.

If they find you they'll hold on relentlessly
without guile, the gaze no less than interrogatory,

fixed, immediate, bringing to bear what there's been
to date. Call her name and perhaps they'll turn to you,

or they might be engaged, looking deeply into the nature
of other things-the affect of wall, the texture of rug,

into something very small that's fallen to the floor
and needs to be isolated and controlled. Maybe

an afternoon reflection, an insect moving slowly,
maybe just looking with loyalty into the eyes of another.