What can poetry say?

I HAPPENED upon this poem on the New York Review of Books's website, and was startled by how beautifully Wislawa Szymborska captures the dance between motion and stillness in Vermeer's "The Milkmaid"—a moment frozen yet continually happening.

So long as that woman from the Rijksmuseum
in painted quiet and concentration
keeps pouring milk day after day
from the pitcher to the bowl
the World hasn’t earned
the world’s end.
I love the shape of the poem—it thins like a stream of milk, pouring itself out. I also love the tension she sets up between the "W" and the "w", which appears hierarchical but is also slippery.
"Vermeer", Wislawa Szymborska, translated from the Polish by Clare Cavanagh and Stanislaw Baranczak 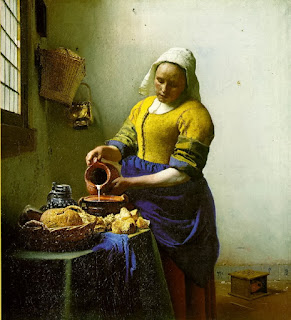 by E.H. | LONDON
THEODOR ADORNO famously declared in 1951 that to write poetry after Auschwitz was “barbaric”. Mindful of the limits of words, generations of poets still strive to use them to describe the impossible.

“Poetry and the State”, an event that took place on September 20th, was haunted by this problem: how to put into words events that leave you speechless. Organised by the poetry initiative “Poet in the City”, the magazine Modern Poetry in Translation and Amnesty International, the evening aimed to show the relevance of poetry in making “a public statement with a universal reach”. The five poets who gave readings were connected, in some way or another, to humanitarian causes. They included Timothy Allen, a former aid worker, Zuzanna Olszewska, a fellow from Oxford who conducts anthropological studies with female Afghan refugees, and Carlos Reyez Manzo, Amnesty's first poet in residence, who survived torture under Pinochet's regime in Chile.

This makes it a difficult event to criticise. But although there were moments of joy in the readings—for instance, the concluding lines in Mr Allen's translation of Ho Chi Minh's “Prison Diary” from the Vietnamese, “my poems are made of steel / and each is an act of resistance”—on the whole, the evening did not hold together. It felt as if the poets had been chosen more for the problems they wrote about rather than how well they wrote. The question of translation only seemed pertinent when Amarjit Chandan read from his poems both in Punjabi and English, creating a delightful interplay between the two languages.

Swamped by the various causes they were connected to, and only speaking for an average of 12 minutes each, the poets were unable to stand out as individuals. They were gathered together under an umbrella of worthiness, but there was no examination of the relationship between poetry and humanitarianism. We were meant to take it for granted that poetry is a force for good against subjects as diverse as Pinochet, Britain's cuts in arts funding (which David Constantine of Modern Poetry in Translation decried for making the country the “philistine place we're in”), and the state of the environment.

“Poetry and the State” seemed to hold a complacent view of poetry as an inherently ethical or comforting medium that brings people together. But in doing so, the evening undermined the power of any one poet to say much of anything.