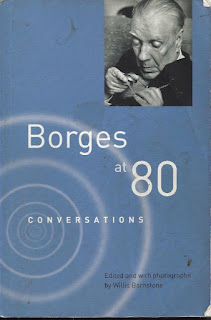 The Nightmare, That Tiger of the Dream

I am often haunted by nightmare.
And I feel that were I a theologian-happily
I am not-I might find an argument in
favor of hell. ... The nightmare has a
peculiar horror to it. The nightmare, that
tiger of the dream.

WILLIS BARNSTONE: In the years that we have known each other we have spoken almost exclusively about poetry.
JORGE LUIS BORGES: Yes. It's the only subject, really.
BARNSTONE: A few days ago when we took a plane in New York, you asked what the name of the airline was, and I said 1W A. You asked what that stood for, and I said Trans World Airlines. Do you remember what you said?
BORGES: Yes. I said that that stood for Walt Whitman Trans World.
He would have enjoyed that.
BARNSTONE: What about that pioneer transworld pilot?
BORGES: I think that what I have to say now is what I said quite some time ago in an essay:  * the fact, forgotten by many people, that Whitman thought of Leaves of Grass as an epic, not as a series of short poems. Now, the epic has been attempted many times, but there always was a central figure. Arma Virum que cano. I mean you always had a character larger than life. For example, you had Ulysses, you had Beowulf, you had Roland. But when Walt Whitman thought of writing an epic, Sewuld he thought, well, this should be an epic of democracy, and so I can't have a central figure. In one of his poems he says: "There are painters who give us pictures of crowds, and one of them has a halo. But I want all of my