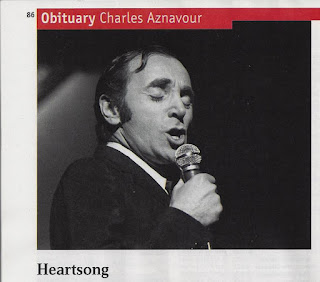 Charles Aznavour, French-Armenian troubadour, died on October 1st, aged 94
For a small guy, Charles Aznavour liked his stage to be big. Really big. He would slip through the curtains at the back and slide into the spotlight, left hand in his pocket, ready to face his audience head-on. Wearing a black rollneck or a skinny tie, he projected an almost jaunty insouciance with his little crooked smile. But his fans knew he was a survivor, someone who got knocked down a lot but always rose again-someone a lot like them. As he lifted the microphone, his face showed a defiant chin, a circumflex of dark eyebrows, closed eyes. For a moment their lids were as white and as curved as a beach in Cuba (one of the many countries that broadcast hours of his music in the days after he died). His dark eyelashes fluttered like palm trees. And then came that voice, crashing on to the heart's shore.
Hier encore, j'avais vingt ans ...
Yesterday when I was young
The taste of life was sweet like rain upon my
tongue,
I teased at life as if it were a foolish game
The way an evening breeze would tease a
candle flame
He was born Shahnour Vaghinag Aznavourian near the Latin Quarter in Paris in 1924, and christened "Charles" by a French nurse who could not pronounce his name. His Armenian parents had taken refuge there while they waited for visas to America. Meanwhile, his father took over a restaurant that featured live music and offered free food to the less well-off. When the business inevitably went bust his mother took in work as a seamstress. But it was singing and performing for other émigrés that consumed the family. Both parents had been trained in the theatre. He made his inadvertent stage debut at three when he wandered in from the wings towards the lights.
At the age of nine he heard Maurice Chevalier sing Donnez-moi la main mam'zelle et ne dites rien ("Give me your hand, miss, and say nothing"). And so he set his young heart on being a singer. But first he took acting classes at l'Ecole des Enfants du Spectacle, known as the College Rognoni after the elderly member of the Comédie Francaise who had founded it the year that Mr Aznavour was born.
His school years, already rickety as he tried to combine homework with touring in provincial theatres, came to an end with the start of the second world war when he was 15. He learned to smoke cigarettes backstage, all the better to fit into life in the theatre. And after the fall of France in 1940, as he later told the Paris Review, he grew adept at selling occupying German soldiers black-market lingerie and chocolate as well as bicycles abandoned at railway stations by fleeing Parisians.
After the war it was Edith Piaf who encouraged him to write songs, and included several of his works in her concert repertoire. Soon he began touring himself. Inevitably, given the age, he also tried the cinema. He worked with some of the great directors, among them Francois Truffaut in Tirez sur le pianiste ("Shoot the Piano Player"). But acting was never his thing. What really brought him to life was songs and songwriting.
Troubadour is a French word. In the high Middle Ages, travelling singer-poets wrote of chivalry and courtly love. He was the 20th-century version-a troubadour of transience, a poet of impermanence. Like many people born in Europe between the mid-1920s and the 1930s, he learned at far too tender an age that the difference between being OK and not OK, between safety and death, between peace and war, is mostly wafer thin. Piaf, who persuaded him to have a nose job and then told him she preferred him as he had been before, famously regretted nothing. He regretted plenty. You could hear it in his words. "My shortcomings are my voice, my height (he measured just five foot three inches, 1.6 metres), my gestures, my lack of education, my frankness and my lack of personality."
His lyrics, written for more than 1,000 songs that sold well over 100m albums, told an even more plaintive story of longing and loss. In Reste ("Stay"), he implores a lover, "satiated, breathless, languid, dizzy", to stay a while, their limbs entwined, in the warmth of the night. "I lost, and so I drank", he explains in j'ai bu. "You never understood that I was lost, and so I drank." Always that regret, that sense of loss of friends and lovers of the past, and even, as he sang fondly in Mes emmerdes, of "my troubles".
Bob Dylan admired him ("I saw him in 6o-something at Carnegie Hall, and he just blew my brains out," he said in 1987), but many Americans never really took to the French crooner, perhaps because his lyrics were so execrably translated or perhaps because they regarded his songs as schmaltzy rather than soulful.
But the French, the Armenians (for whom he sang and raised money after a deadly earthquake in 1988), the Cubans and the French-speaking north Africans never stopped loving the little guy, the chanteur who recalled their fleeting youth, their lost selves. He would have smiled his little crooked smile had he heard that at a service of national homage, attended by three French presidents, Emmanuel Macron stood by the flag-draped coffin placed in front of Napoleon's tomb at Les Invalides, compared his literary gifts to those of Guillaume Apollinaire and declared: "In France, poets never die." •