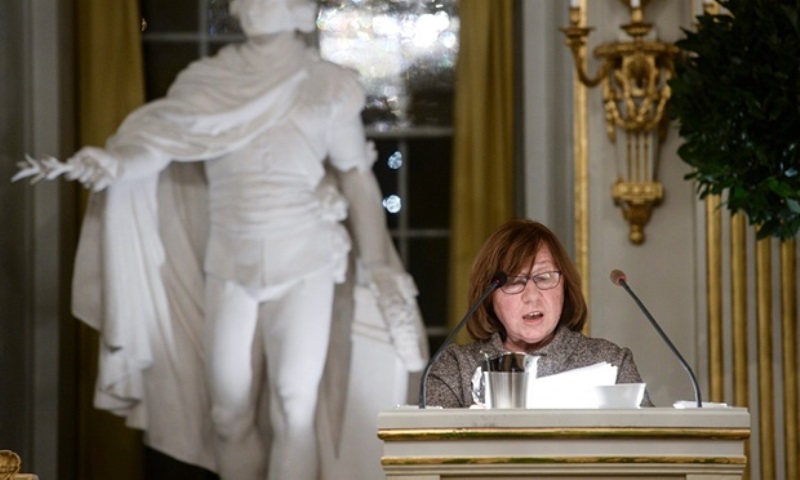 The Belarusian journalist said in her Nobel lecture that former Soviet countries were ‘again living in an era of power’, and recounted her time reporting the Chernobyl disaster from the radiation zone

The 2015 Nobel literature laureate Svetlana Alexievich has said that Russia “missed the chance” it had in the 1990s to become a country “where people can live decently”, choosing instead to become “a strong country”.

During her Nobel lecture on Monday, the Belarusian journalist said “a time full of hope has been replaced by a time of fear”. Alexievich, whose oral histories tell the stories of thousands of individuals from the Soviet Union, said that “the era has turned around and headed back in time. The time we live in is secondhand.”
“I will take the liberty of saying that we missed the chance we had in the 1990s. The question was posed: what kind of country should we have? A strong country, or a worthy one, where people can live decently? We chose the former – a strong country. Once again, we are living in an era of power. Russians are fighting Ukrainians. Their brothers … Russian planes are bombing Syria,” she said.
“Sometimes I am not sure that I’ve finished writing the history of the ‘Red’ man … I have three homes: my Belarusian land, the homeland of my father, where I have lived my whole life; Ukraine, the homeland of my mother, where I was born; and Russia’s great culture, without which I cannot imagine myself. All are very dear to me. But in this day and age it is difficult to talk about love.”
Alexievich was praised by the Swedish Academy for her “polyphonic writings, a monument to suffering and courage in our time” when it announced her as the winner of the 2015 Nobel prize in literature last October. During her lecture on Monday she said she sets out to “collect the everyday life of feelings, thoughts, and words”.
I have been shocked and frightened by human beings … [but] I have seen the sublime in people, and wanted to cry.
“I collect the life of my time. I’m interested in the history of the soul. The everyday life of the soul, the things that the big picture of history usually omits, or disdains. I work with missing history. I am often told, even now, that what I write isn’t literature, it’s a document,” she said.
“I’m interested in little people. The little, great people, is how I would put it, because suffering expands people. In my books, these people tell their own, little histories, and big history is told along the way … I have collected the history of ‘domestic,’ ‘indoor’ socialism, bit by bit. The history of how it played out in the human soul. I am drawn to that small space called a human being … a single individual. In reality, that is where everything happens.”
But Alexievich noted that she had not “always been up to following this path”. “The road to this podium has been long – almost 40 years, going from person to person, from voice to voice,” she said. “Many times I have been shocked and frightened by human beings. I have experienced delight and revulsion. I have sometimes wanted to forget what I heard, to return to a time when I lived in ignorance. More than once, however, I have seen the sublime in people, and wanted to cry.”
Few English editions of her work were available when Alexievich won the Nobel, although her work has been widely translated into other languages. Penguin Modern Classics has since acquired four of her books, and will release a new translation of the title it called her “masterpiece”, Voices from Chernobyl, to mark the 30th anniversary of the Chernobyl disaster, on 26 April 1986. The book, based on more than 500 interviews with eyewitnesses of the incident, will be called Chernobyl Prayer and will be published next April.
In her Nobel lecture, Alexievich spoke of how in Chernobyl, “you couldn’t see the radiation, or touch it, or smell it … The world around was both familiar and unfamiliar. When I travelled to the zone, I was told right away: don’t pick the flowers, don’t sit on the grass, don’t drink water from a well … Death hid everywhere, but now it was a different sort of death.”
She added: “For me the world parted: inside the zone I didn’t feel Belarusian, or Russian, or Ukrainian, but a representative of a biological species that could be destroyed,” she said. “Two catastrophes coincided: in the social sphere, the socialist Atlantis was sinking; and on the cosmic – there was Chernobyl.”
A new translation of Alexievich’s Zinky Boys, drawn from voices from the Afghan war, is due out from Penguin Press in November 2016 , with War’s Unwomanly Face and Last Witnesses to follow in 2017.
“By charting a new history of feelings, she has shown that non-fiction is more important than ever,” Ionita added. “She is an inspiration to many writers around the world, and British readers will finally be able to read her works in brilliant translations.