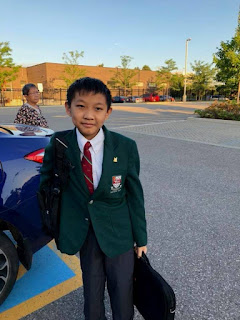 POETRY WILL SAVE YOUR LIFE

"The child is father of the man" is an idiom originating from the poem "My Heart Leaps Up" by William Wordsworth.

My heart leaps up when I behold
A rainbow in the sky:
So was it when my life began;
So it is now I am a man;
So be it when I shall grow old,
Or let me die!
The Child is father of the Man;
And I could wish my days to be .
Bound each to each by natural piety.

In the Wordsworth poem the speaker looks upon a rainbow and remembers how he felt as a child and reflects that the child within us gives rise to who we are as adults. The Hopkins poem is born out of his quarrel with Wordsworth's conceit. When I fall into the Hopkins poem as an adult taking care of her mother, I find within it the strange reality that happens as parents age and suddenly the child becomes the caretaker of the parent. And yes, agreed, when this happens it is "wild!" Critics have read the Wordsworth poem as an ode to nature and to Wordsworth's deep connection to the natural world through the life cycle. Poems are often born out of quarrels and quandaries. Hopkins quarrels with Wordsworth, with himself, and with the universe in "The Child is Father to the Man." Hopkins was a complicated person. In Lives of the Poets, Michael Schmidt writes, "He became a Catholic against the wishes of his family; a Jesuit against the advice of his friends; a disciple of Scotus against the orthodoxy of his order; he had made himself alone." 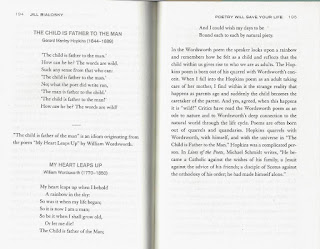