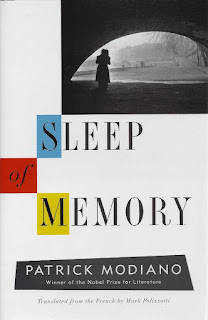 Patrick Modiano's first novel since his 2014 Nobel Prize revisits moments of the author's past to produce a spare yet moving reflection on the destructive underside of love, the dreams and follies of youth, the vagaries of memory, and the melancholy of loss. Writing from the perspective of an older man, the narrator relives a key period in his life through his relationships with several enigmatic women - Genevieve, Martine, Madeleine, a certain Madame Huberson-in the process unearthing his troubled relationship with his parents, his unorthodox childhood, and the unsettled years of his youth that helped form the celebrated writer he would become. This is classic Modiano, utilizing his signature mix of autobiography and invention to create his most intriguing and intimate book yet.

"Brief but vast and echoing, impossible to summarize, Sleep of Memory is Modiano at his most sublime."
- LUC SANTE, author of The Other Paris

"It's thrilling to read Modiano's narratives of a cosmic mystery so substantive, yet so personal, that it need not be named.
Though names do appear everywhere, lit up like stars above a dark landscape, mapping locations, naming the players (often with fluid identities) in a shape-shifting yet eternal drama. In Modiano, mysteries don't exist to be solved; instead, they are compounded. I love the metaphorical connotations here of people one might assume have vanished, though 'they only changed neighborhoods.'"
-ANN BEATTIE

"A lapidary master, Modiano compellingly evokes a particular city (Paris) in a historical moment, through the recollections of his idiosyncratic protagonist. Simultaneously illusory and utterly precise, Sleep of Memory reverberates powerfully in the reader's imagination."
-CLAIRE MESSUD, author, most recently, of The Burning Girl

"Rarely do we have the opportunity to watch a major writer take shape before our eyes, as if his entire career were being replayed in fast-forward. Not since the Roberto Bolano craze of the last decade have American readers seen anything like it."
-ADAM KIRSCH, Daily Beast