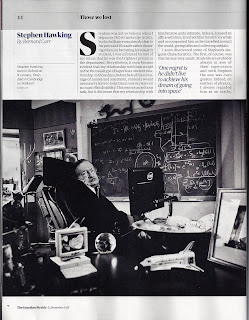 Stephen was not so famous when I began my PhD at Cambridge in 1972, but his brilliance was already clear to his peers and  Ifound it rather daunting when, on becoming his research student, I was informed by one of my tutors that he was the brightest person in the department. Nevertheless, it soon became evident that my relationship with him would not be the usual type of supervisor-student relationship. In those days, before he had his entourage of nurses and assistants, students would necessarily have to help him in various ways on account of his disability. This was not an arduous task, but it did mean that my relationship with him became quite intimate. Indeed, I shared an office with him, lived with his family for a while and accompanied him as he travelled around the world, giving talks and collecting medals.
I soon discovered some of Stephen's singular characteristics. The first, of course, was that he was very smart. Students are probably always in awe of their supervisors and with Stephen the awe was even greater. Indeed, on matters of physics, I always regarded him as an oracle,

just a few words from him yielding insights that would have taken weeks to work out on my own. However, Stephen was only human and not all encounters led to illumination. Once I asked a question about something that was puzzling me. He thought about it silently for several minutes and I was quite impressed with myself for asking something that Stephen couldn't answer immediately. His eyes then closed and I was even more impressed with myself because he was clearly having to think about it very deeply. Only after some time did it become clear that he had fallen asleep.
The other human side of Stephen is that he didn't suffer fools gladly and sometimes got annoyed. One of the stories put around is that he would vent his frustration by running over students' toes. I'm not sure about that - he once ran over the toes of the Prince of Wales, and I'm sure that was just an accident. On the other hand, I well recall one occasion when I made a remark in the departmental common room at tea time that showed I had misunderstood what he'd been saying. Stephen screamed "No!" so loudly that his wheelchair shot back halfway across the room under the recoil. I was most impressed that a single word from him could have such dramatic consequences.
I also learned about Stephen's stubbornness and determination to continue doing things for himself as long as possible, despite the relentless progress of his illness. For example, because he had an office in both the department of applied mathematics and theoretical physics and the Institute of Astronomy at Cambridge, I also had offices in both places. I recall that he sometimes gave me a lift (probably illegally!) between the two places in his three-wheeled invalid car. I found this rather scary because I thought he drove faster than was safe. Later, he had to discontinue the use of the car but he never lost his drive and the desire to travel as far and wide as possible. One regret is he didn't live long enough achieve his dream of going into space.
I'm often asked where Stephen stands in the pantheon of great physicists. Stephen himself never claimed to have the status of Newton or Einstein, but I strongly disagree with people who suggest that his scientific contributions have been exaggerated because of his iconic status. I doubt any other contemporary physicist will achieve the accolade of being interred next to Isaac Newton in Westminster Abbey.
Stephen died on Einstein's birthday and was born on the date of Galilee's death, so it's odd that he should be connected to his two greatest heroes in this way. The synchronicity is fitting because his first major discovery was that space-time trajectories can have singular endpoints where strange things may happen. Stephen was the most singular person I have ever known and I feel truly privileged that he was my friend.
Bernard Carr is a professor of mathematics and astronomy at the Queen Mary University of London