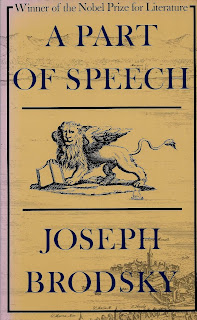 "He has not returned to his old Florence,
even after having died . . ."
-Anna Akhmatova

I
The doors take in air, exhale steam; you, however, won't
be back to the shallowed Arno where, like a new kind
of quadruped, idle couples follow the river bend.
Doors bang, beasts hit the slabs. Indeed,
the atmosphere of this city retains a bit
of the dark forest. It
is a beautiful city where at certain age
one simply raises the collar to disengage
from passing humans and dulls the gaze.

II
Sunk in raw twilight, the pupil blinks but gulps
the memory-numbing pills of opaque streetlamps.
Yards off from where the Signoria looms,
the doorway, centuries later, suggests the best
cause of expulsion: one can't exist
by a volcano and show no fist,
though it won't unclench when its owner dies.
For death is always a second Florence in terms of size
and its architecture of Paradise.

III
Cats check at noon under benches to see if the shadows are
black, while the Old Bridge (new after repair) ,
where Cellini is peering at the hills' blue glare,
buzzes with heavy trading in bric-a-brac.
Flotsam is combed by the arching brick.
And the passing beauty's loose golden lock,
as she rummages through the hawkers' herd,
flares up suddenly under the arcade
like an angelic vestige in the kingdom of the dark-haired.
IV
A man gets reduced to pen's rustle on paper, to
wedges, ringlets of letters, and also, due
to the slippery surface, to commas and. full stops. True,
often, in some common word, the unwitting pen
strays into drawing-while tackling an
"M"-some eyebrows: ink is more honest than
blood. And a face, with moist words inside
out to dry what has just been said,
smirks like the crumpled paper absorbed by shade.

V
Quays resemble stalled trains. The damp
yellow palazzi are sunk in the earth waist-down.
A shape in an overcoat braves the dank
mouth of a gateway, mounts the decrepit, flat,
worn-out molars toward their red, inflamed
palate with its sure-as-fate
number 16. Voiceless, instilling fright,
a little bell in the end prompts a rasping "Wait!"
Two old crones let you in, each looks like the figure 8.

VI
In a dusty cafe, in the shade of your cap,
eyes pick out frescoes, nymphs, cupids on their way up.
In a cage, making up for the sour terza-rima crop,
a seedy goldfinch juggles his sharp cadenza.
A chance ray of sunlight splattering the palazzo
and the sacristy where lies Lorenzo
pierces thick blinds and titillates the veinous
filthy marble, tubs of snow-white verbena;
and the bird's ablaze within his wire Ravenna.

VII
Taking in air, exhaling steam, the doors
slam shut in Florence. One or two lives one yearns
for (which is up to that faith of yours)-
some night in the first one you learn that love
doesn't move the stars (or the moon) enough.
For it divides things in two, in half.
Like the cash in your dreams. Like your idle fears
of dying. If love were to shift the gears
of the southern stars, they'd run to their virgin spheres.

VIII
The stone nest resounds with a piercing squeal
of brakes. Intersections scare your skull
like crossed bones. In the low December sky
the gigantic egg laid there by Brunelleschi
jerks a tear from an eye experienced in the blessed
domes. A traffic policeman briskly
throws his hand in the air like a letter X.
Loudspeakers bark about rising tax.
Oh, the obstinate leaving that "living" masks!

IX
There are cities one won't see again. The sun
throws its gold at their frozen windows. But all the same
there is no entry, no proper sum.
There are always six bridges spanning the sluggish river.
There are places where lips touched lips for the first time ever,
or pen pressed paper with real fervor.
There are arcades, colonnades, iron idols that blur your lens.
There the streetcar's multitudes, jostling, dense,
speak in the tongue of a man who's departed thence.

The epigraph is from Akhmatova's poem "Dante."
IV: "the unwitting pen strays into drawing-while tackling- and 'M'-
some eyebrows" alludes to the medieval notion that facial features represent letters in the phrase OMO DEI.