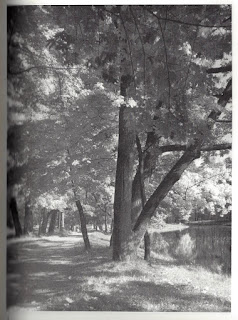 From NORTHERN ELEGIES
THE FIRST
Prehistory
I no longer live there...
PUSHKIN

It's Dostoievsky's Russia ... The moon
Almost a quarter hidden by the bell tower.
Taverns are bustling, horse-cabs fly along,
Five-storey hulks are growing near the Smolny.
Dance-classes thrive, and money-changers' signs,
And signs for corsets, underwear and hats
And superb coffins - 'Shurnilov & Sons'.
But still, it's not changed much; not only I
Have said it could be an old lithograph,
Not first-class, but quite decent - 1870,
I'd guess ...
In winter, just before the dawn,
Or at the twilight - then behind the gates
Darkens the straight Liteiny Boulevard,
Not desecrated yet by Art Nouveau,
And opposite me Nekrasov, Saltikov,
Live on memorial plinths. How horrified
They'd be if they could see them! Let's move on.

And the splendid ditches of Old Russia, and
The rotting arbours in the little gardens,
A windowpane as black as a hole through ice.
And it seems things happened here which we
Had better not look in on. We should leave.
Not every place yields up its secrets, (and
Optina's monastery's closed to me ... )

Rustle of skirts, and patterning of plaids;
The mirrors, walnut-framed, astonished by
The beauty of Karenina; and in
The narrow hall, the wallpaper we loved
In childhood -lit by kerosene, the same
Plush on the armchairs ...
Everything disordered somehow, rushed...
Fathers, grandfathers, incomprehensible.
Lands mortgaged. And in Baden - roulette.

And there's a woman with translucent eyes
(So deep a blue, I couldn't look at them
And not think of the sea) and with white hands
And kindness that I have inherited
I t seems - a useless gift in this harsh life ...
The country shivers, and the convict from Omsk
Understood everything and made the sign of the cross
Over us all. Now like some kind of spirit
In this primordial chaos he shuffles, rises.
Midnight. His pen squeaks. Page after page stinks
Of the square where he awaited execution.
This is when we decided to be born
And, having timed it perfectly not to miss
The spectacles and entertainments still
To come, we bid farewell to non-existence.
3 September 1940, Leningrad
October 1943, Tashkent
Translated by D.M. Thomas, Everyman’s Library

NORTHERN ELEGIES
Everything is a sacrifice to your memory…
Pushkin

There will be seven-I decided
It is time to tempt fate,
And the first has finished
Its path to the pillory.

Prehistory
I no longer live there…
Pushkin
Dostoevsky's Russia. The moon,
Almost a quarter hidden by the bell tower.
Pubs are bustling, droshkies flying,
In Gorokhovaya, near Znameniya and Smolny,
Huge, five-storied monstrosities are growing,
Dance classes everywhere, money changers' signs,
A line of shops: "Henriette," "Basile," "André”
And magnificent coffins: "Shumilov Senior."
But still, the city hasn't changed much.
10 Not only I, but others as well,
Have noticed that sometimes it could
Resemble an old lithograph,
Not first class, but fairly decent,
From the Seventies, I'd guess.
Especially in winter, before d:lwn,
Or at twilight – then behind the gates
*
Liteiny Boulevard darkens, rigid, straight,
Not yet disgraced by the Moderne,
And opposite me live-Nekrasov
And Saltikov ... Each on his memorial plaque.
Oh, how horrified they would be
To see those plaques! I move on.
And the splendid ditches of Old Russa,
And the rotting arbors in the little gardens,
And a windowpane as black as a hole m the ice,
And it seems that such things happened here
That we'd better not look in. Let's leave.
Not every place agrees
To render up its secrets
(And I won't be in Optina anymore... )

The rustle of skirts, the pattern of plaids,
The walnut frames of the mirrors
Amazed by Karenina's beauty,
And in the narrow hall the wallpaper
We feasted our eyes on in our childhood
By the yellow light of the kerosene lamp,
And the same plush on the armchairs...
Everything out of order, rushed, somehow...
Fathers and grandfathers incomprehenslble.
Lands mortgaged. And in Baden-roulette.

And a woman with translucent eyes
(Of such deep blue, that to gaze into them
And not think of the sea was impossible),
With the rarest of names and white hands,
And a kindness that as an inheritance
I have from her, it seems-
Useless gift for my harsh life ...

The country shivers, and the convict from Omsk
Understood everything and made the sign of the cross
over it all
Now he shuffles everything around
And, over this primordial chaos,
Like some kind of spirit, he rises. Midnight SI )111
His pen squeaks, and page after page
Stinks of Semyonov Square.

This is when we decided to be born,
And timing it perfectly
So as not to miss any of those pageants
Yet to come, we bid farewell to non-existence