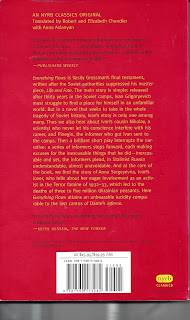 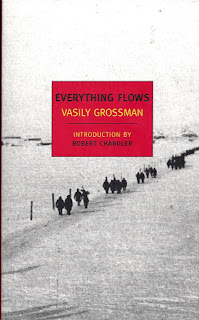 Do you know? At the very worst times I used to imagine being embraced by a woman. I used to imagine this embrace as something so wonderful that it would make me forget everything I had been through. It would be as if none of it had ever happened. But it turns out that it's you I have to talk to, that it's you I have to tell about the very worst time of all. You yourself, after all, talked all through that first night. Happiness, it turns out, will be to share with you the burden I can't share with anyone else-the burden I can share only with you.

This exchange of gifts is not, of course, enough to save Anna's life, nor is it enough to restore the thirty years that Ivan has lost to the Gulag. It is, however, enough to validate Grossman's claim that freedom does not die, that it is the essence of our humanity. For all the pain gathered within it, Everything Flows is a gift, Grossman's last gift to the world. And one of the most precious understandings it embodies is that if we can speak truthfully and trustingly, our histories can cease to be burdens. Any story, truly told and truly listened to, can become a gift.
-ROBERT CHANDLER