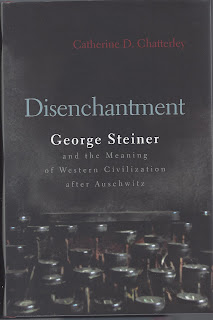 Written in 1959, while Steiner was a Fulbright scholar at the University of Innsbruck in Austria, "The Hollow Miracle" is his first publication to deal specifically with Germany. The essay unleashed a storm of controversy among German readers at the time, and again in 1966 at a meeting of German writers in the United States, and as Steiner remembers, "understandably... caused much hurt and anger.":" The title refers to the emptiness Steiner saw at the center of Germany's postwar recovery. The country was growing economically and Germans were actively engaged in building a better future, but they were also committed to burying the past without first confronting it. According to Steiner, the message Germans received after the war was: "Forget the past. Work. Get prosperous. The new Germany belongs to the future."28 Steiner worried that this message guaranteed that "'let us forget' [would become] the litany of the new German age.'?"

Of lasting significance here is George Steiner's theory of language. He diagnoses the crisis in postwar German society through his own evaluation of the contemporary condition of the German language: "The thing that has gone dead is the German language. Open the daily papers, the magazines, the flood of popular and learned books pouring off the new printing presses; go to hear a new German play, listen to the language as it is spoken over the radio or in the Bundestag. It is no longer the language of Goethe, Heine, and Nietzsche. It is not even that of Thomas Mann. Something immensely destructive has happened to it. It makes noise. It even communicates, but it creates no sense of communion?

Language is central to Steiner's understanding of culture and humanity. He believes that it is our linguistic capability that makes us uniquely human, and through our creative use of language we relate humanity to that which is humane. According to Steiner, "languages are living organisms. Infinitely complex, but organisms nonetheless. They have in them a certain life-force, and certain powers of absorption and growth. But they can decay and they can die."

Steiner believes the corrosion of German begins with national unification in 1871. Nationalism and the imposition of Prussian authority, represented by militant historians, philologists, and "incomprehensible metaphysicians," "produced that fearful composite of grammatical ingenuity and humorlessness which made the word 'Germanic' an equivalent for dead weight.”

Those writers who carried the poetic genius of German were those who wrote either before unification or outside the new nation: Luther, Goethe, Schiller, Kleist, Heine, Nietzsche, Kafka, and Rilke." In Steiner's estimation, there is a dialectical relationship between language and culture wherein social and historical pressures affect language, which in turn conditions the habits of a culture. For Germany, Steiner argues, this relationship had profound consequences:

For to the academicism and ponderousness of German as it was written by the pillars of learning and society between 1870 and the First World War, the imperial regime added its own gifts of pomp and mystification. The "Potsdam style" practiced in the chancelleries and bureaucracy of the new empire was a mixture of grossness ("the honest speech of soldiers") and high flights of romantic grandeur (the Wagnerian note). Thus university, officialdom, army, and court combined to drill into the German language habits no less dangerous than those they drilled into the German people: a terrible weakness for slogans and pompous clichés (Lebensraum, "the yellow peril," "the Nordic virtues"); an automatic reverence before the long word or the loud voice; a fatal taste for saccharine pathos (Gemutlichkeit) beneath which to conceal any amount of rawness or deception.

Myths and lies are communicated through the vehicle of language. In Germany, they begin to take on a deadly importance after 1918, especially the infamous "stab in the back" mythology used to explain Germany's defeat in World War I. Before the rise of Hitler, there was a window of opportunity for German literature. Unfortunately, the "brilliant, mutinous period" of 1920-30, host to Bertold Brecht, Thomas Mann, Rilke, Kafka, and Robert Musil, was but "a brief noontime" after which Adolf Hitler turned language into one of the most powerful political weapons in history.
Under Nazism, the German language was used to transform human beings into vermin; to secretly orchestrate the destruction of the Jewish people; to chronicle the humiliation, torture, and murder of Germany's "enemies"; and to deceive foreign governments and the domestic population about any number of issues. Referring to the "Horst Wessel Lied," the "fight song" of the S.A. (Stormtroopers), Steiner asks, "how should the word 'spritzen’ recover a sane meaning after having signified to millions the 'spurting' of Jewish blood from knife points?" The point of Steiner's essay is to demonstrate that languages, like institutions and cultural traditions, can be permanently scarred when they are used to facilitate crimes against humanity." Like human beings, languages are resilient but there is a point at which they break:

Use a language to conceive, organize, and justify Belsen; use it to make out specifications for gas ovens; use it to dehumanize man during twelve years of calculated bestiality. Something will happen to it. Make of words what Hitler and Goebbels and the hundred thousand “Untersturmfuhrer” made: conveyers of terror and falsehood. Something will happen to the words. Something of the lies and sadism will settle in the marrow of the language. Imperceptibly at first, like the poisons of radiation sifting silently into the bone. But the cancer will begin, and the deep-set destruction. The language will no longer grow and freshen. It will no longer perform, quite as well as it used to, its two principle functions: the conveyance of humane order which we call law, and the communication of the quick of the human spirit which we call grace.

The essay concludes with Steiner's frustration over the return of mythology and lies to the German language in a postwar period characterized by "dissimulation and deliberate forgetting.?'? Steiner states categorically that the only way to rehabilitate the German language is for Germans to begin speaking the truth about Nazism." At the same time, Steiner's statement acknowledges the very possibility of rehabilitation (even in the extreme case of Nazified German), the resiliency of human beings and language, and the centrality of literature and criticism to this recuperative process. He continues to develop his argument on the importance of literary criticism to the preservation of language and culture in his first book, also published in 1959.