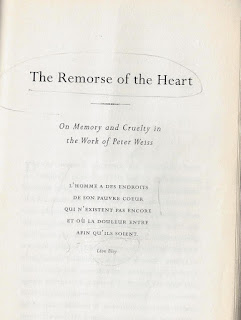 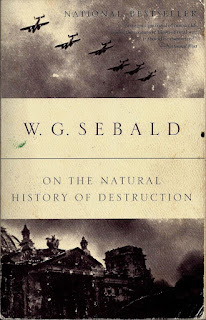 W. G. Sebald's essay on Peter Weiss (1916-1982) is the last one in On the Natural History of Destruction. It mixes literary criticism and art (paintings) criticism. What is puzzling here is that, given Sebald's penchant for illustrating his books with photographs, this essay did not reproduce the many paintings mentioned in the text. The essay began with a description of a painting called Der Hausierer (1940) by Peter Weiss. It shows a circus right in front of an industrial complex. It's the one pictured above. Sebald interpreted this "self-portrait" of Weiss as an expression of the artist's (the peddler in the picture) need to enter the dwellings of the dead, represented by the circus tent. Death is closely associated with the painter, who survived the death of his sister, bosom friend, parents, and "all the other victims of history." Sebald expounded on this death motif and, in the process, perhaps shared his self-identification with Weiss:

The process of writing which Weiss has recently planned, now that he is about to embark on his literary work Ästhetik de Widerstands ("Aesthetic of Resistance"), is the struggle against the "art of forgetting," a struggle that is as much part of life as melancholy is of death, a struggle consisting in the constant transfer of recollection into written signs. Despite our fits of "absence" and "weakness," writing is an attempt "to preserve our equilibrium among the living with all our dead within us, as we lament the dead and with our own death before our eyes," in order to set memory to work, since it alone justifies survival in the shadow of a mountain of guilt.


Sympathy (one that goes "beyond mere pity"), added Sebald, is the element which reinforces the recollection of the dead against forgetfulness of the living. These sources of Weiss's writings—death, melancholy, memory, guilt, pain and sympathy—are ever present in Sebald's novels. As with Jean Améry, the novelist’s identification with this forerunner is grounded in the attempts of men to make sense of cruelty and evil in history. The two writers are speaking for the dead, who returns to us.

From this first painting Sebald moved on to Weiss's Das grosse welttheater ("Great World Theater," 1937, pictured below) which he compared to Albrecht Altdorfer Alexanderschlacht's "Battle of Alexander" (1529). The latter painting was also mentioned in Sebald's prose poem After Nature.

The other paintings discussed include Weiss's "Concert in the Garden" (1938) and the anatomical painting of a corpse lying on a dissecting table (1946), which led Sebald to once again reflect on Rembrandt van Rijn's (1606-1669) "The Anatomy Lesson," the one about Dr. Nicolaes Tulp and the guild of surgeons surrounding the body of Aris Kindt. This painting was written about at length in the first chapter of The Rings of Saturn and Sebald here reiterated its significance to Weiss's work and, possibly to his own: "Rembrandt's picture of the dissection of a hanged body in the interests of higher ideals is an unsettling comment on the particular kind of knowledge to which we owe progress." 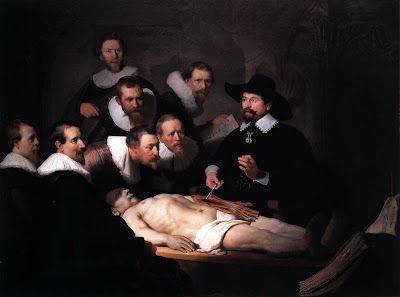 Sebald's fixation with "The Anatomy Lesson" in his novel and here in the essay on Weiss reflects a particular obsession with suffering and mortality. The context surrounding his investigation of the painting in the novel starts with the search for the skull of Thomas Browne (1605-1682), a contemporary of Rembrandt. Here is a summary from my previous post:

Sebald’s description of the painting betrayed his sympathy for Aris Kindt, the criminal whose body was being dissected. Sebald thought of the anatomy lesson as an extension of the corporal punishment on earth of a man hanged just a moment before. He seemed to be giving something of a critique of the scientific enlightenment that the lesson was providing its onlookers. In any case, it was hard not to detect an aversion on the part of Sebald while viewing the painting as if he himself was present during the entire operation, watching the Guild of Surgeons surrounding the body on the table, each surgeon fixated on the "open anatomical atlas in which the appalling physical facts are reduced to a diagram, a schematic plan of the human being."

It was likely that Sebald identified with the body prostrate on the table as he returned to his recollections of his time in the hospital after his own surgery....

In the light of the painting's explication in Weiss's essay, it is apparent that the dissection of a body represents more than a personal association for Sebald but his central critique of human capacity for cruelty and capital punishment. Sebald can be said to be viewing the autopsy and harvest of a dead man's vital organs as the second death of the man already punished by men on earth. This is highlighted by the reactions of the onlookers in the painting which treat the body as only a material or life's residue to be learned from, the remains of a man already devoid of humanity or soul.

Says Sebald in introducing the first anatomical picture of Weiss, "... there undoubtedly lies panic terror of an execution that will inflict further destruction, even after death, on the guilty victim's body.... [Weiss] diagnoses this process not merely as a legal measure in those societies which make a public festival of capital punishment ... but points out that even (and indeed more particularly) "enlightened" civilizations have not abandoned that most drastic form of penalty which consists of cutting up and disemboweling the human body, thus literally making detritus of it."

One can safely assume that Sebald, humanist novelist that he is, is not a proponent of the death penalty. This is, in fact, the first cruelty prior to the lesson in anatomy. Weiss himself painted two versions of the dissection, which constitutes the second act of cruelty. The first picture is a cubist work in which the expressions on the faces of the three men (abstract, contemplative, indifferent, professional) were likened by Sebald to the vague, blank expressions of the guild of surgeons in Rembrandt's first painting.

Of the second "much more primitive anatomical picture" painted two years earlier, Sebald detected a "far more humane and far more cruel" stance, a disturbing contradiction. Sebald saw the possibility in the picture that "Peter Weiss felt a certain morbid interest in the process and identified with the anatomist":


One cannot be certain whether the painter imagined himself subjected to the procedure he shows, or whether, like Descartes (known to have been an enthusiastic amateur surgeon who in all historical probability attended several of Dr. Tulp's anatomy lessons), he thought that he could discover the secret of the human machine in the dissection of bodies, a subject to which he returns again and again.... [W]ith a knife in his right hand, an organ he has removed in his left, and bending over the human body he [the anatomist, though it could apply to the painter as well] has opened up with an expression of utter desolation.


(It is interesting to note that both Rembrandt and Weiss painted two anatomy lessons each. The Aquarium of the Vulcan blog pointed out that there was speculation in 1950 that Thomas Browne may be a sitter in the second dissection by Rembrandt, "The Anatomy Lesson of Dr Deyman" (1656). This could lend credence to Sebald's supposition that Browne may have attended an anatomy lesson. Sebald may not be aware of this connection to Browne for otherwise he would certainly include this possibility in his novel full of circular references to Browne and to discussion of pictures from the perspective and point of view of painters. The dead man in the second picture is Joris Fonteijn, a condemned thief just like Aris Kindt in the earlier Rembrandt. The skull cap is being held by Deyman's assistant (the possible Browne study), Gysbrecht Matthijsz Calcoen, while Deyman is removing a piece from the brain. According to the records of the Anatomy Theatre, Amsterdam: "on January 28th 1656, there was punished Joris Fonteijn of Diest, who by the worshipful lords of the law court was granted to us an anatomical specimen. On the 29th Dr Joan Deyman made his first demonstration on him in the Anatomy Theatre, three lessons altogether" (Haas, 1992, Journal of Neurology, Neurosurgery, and Psychiatry.) The Republic of Togo issued a commemorative stamp of the painting in 1968.)

In the essay, Sebald also mentioned Weiss's history of the painter Théodore Géricault (1791-1824) in Aesthetics of Resistance which once again demonstrated Weiss's use of the death motif in his art: "Such an affinity with the dead, impelled by a desire for knowledge but also implying a libidinous occupation of the dissected body, makes one suspect that the handling of paint in a case like Géricault's, an example of the extremist practice of art to which Weiss too subscribes, is ultimately equivalent to an attempt by the subject, horrified as he is by human life, to do away with himself through successive acts of destruction."


The rest of the paintings in "The Remorse of the Heart" are collected in this German site:


The human body, the physical body, is a theater of war. As foreign instruments invade the skin and penetrate the muscles and tissues, they invade the territory of man's shell-casing. The humanity and the cruelty, or just the plain cruelty, of the exercise are exemplified by the systematic cutting and processing of the shell-casing and in laying out and labeling of the component parts. Knowledge generated and gained from the exploitative procedure, to be exploited by medical science, does not matter because, as Sebald notes, it "makes little difference to the process itself." It's double death arriving, driving home the truth of cruelty to the first cruelty, that is death by hanging or torture.