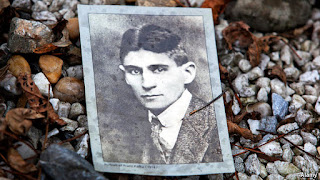 A closer look at the young Kafka

POOR Franz Kafka. His lifetime being misunderstood by his family has been followed by an even longer literary afterlife being misunderstood by the world. According to a new biography by Reiner Stach, Kafka was not the neurotic, world-removed writer of, say, Isaac Bashevis Singer’s 1960s story, “A Friend of Kafka”, in which a friend says Kafka’s inhibitions “impeded him in everything”. Nor was he scarred solely by a difficult relationship with his overbearing father, an idea that Alan Bennett’s play “Kafka’s Dick” toyed with in the 1980s.

In “Kafka: The Early Years”, the last instalment of a mighty, three-volume biography, Mr Stach pursues close description of Kafka’s life and times rather than the “critical biography” approach combining biography and textual interpretation. What Mr Stach uncovers in this volume—written last because of a long struggle over access to documents—are the formative experiences of a Kafka who becomes new and surprisingly relevant.

“Readers…will find myths about Kafka exploded,” writes Shelley Frisch in her translator’s preface. Mr Stach himself lauds “the many pieces of the mosaic discovered by others”, a half-century of academic discovery (about Kafka’s first-rate work as an insurance clerk, for example) that Mr Stach now brings to a wider audience. Yet even those immersed in the specialist work benefit from the illumination that Mr Stach’s detailed digging brings.

Kafka wrote his famous “Letter to His Father” in 1919, in which he took his father, Hermann, to account for his boorish ways with his son, who became beset by guilt and fear of punishment. But, as Mr Stach vividly shows, loneliness, not humiliation, was Kafka’s first formative experience. Until he was four, his father and mother were busy in the family haberdashery shop 12 hours a day, six and a half days a week. Kafka learned that social relations were fraught and unstable—with great consequence for literature.

In Mr Stach’s telling, this insecurity was compounded by threats that the observant and highly sensitive Kafka found in the world: an education system based on rigorous exams, and the risk of failing them; a society beset by tensions between Czechs and Germans, in which Jews were often the scapegoats; and new-fangled machines like aeroplanes, which both delighted and terrified the young author.

According to Mr Stach, guilt and punishment preoccupied Kafka from 1912—the year he wrote “The Metamorphosis”, a groundbreaking story—until early 1915. But later works posed a new question: “What do people have to do to be accepted by a group—and why are some never accepted?” For the biographer, this is precisely the theme of “The Castle”, an unfinished novel that Mr Stach calls Kafka’s most brilliant work, written two years before he died of tuberculosis in 1924, aged 40.

In today’s age of backlash against globalisation, the arc that Mr Stach draws between “The Early Years” and Kafka’s later life takes on a new significance. It traces the life of a misunderstood German-speaking Jew in a city run first by an Austrian emperor, then by assertively nationalist Czechs. “We move from guilt to the question of identity,” Mr Stach says. “The question, ‘Who am I?’ is, after all, closely linked to, ‘Where do I belong?’”

The bloody climax of nationalism that followed makes Kafka’s story not a little poignant: he found a true home neither in life nor in death. The difficulty of writing “The Early Years” was a symptom of this. Mr Stach spent years trying to persuade the Israeli heirs of Max Brod, Kafka’s friend and literary executor, who left Prague for Palestine in the 1930s, to let him read Brod’s diaries. Though he will not say how, Mr Stach got hold of copies of three volumes, rendering new insights about Brod’s and Kafka’s world.

The Israeli Supreme Court recently ruled that the Brod manuscripts should be placed in the National Library. This is good news for the public, but ensures that Kafka will remain rootless: his and Brod’s manuscripts will be scattered between Germany, Britain and Israel. And rootlessness breeds indifference. Vienna has neglected the sanatorium where Kafka died. Berlin has left commemoration of Kafka’s time there to private initiatives. And the Czech government sees Kafka more as a tourist magnet than as a cultural icon. Mr Stach concludes that “No state feels responsible for him. That’s absurd.” 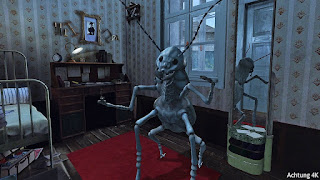 STEPPING through the gauzy curtains, Michael Syrovatka screams and lurches backwards. In the real world, he is on the first floor of the Goethe-Institut (GI) in Prague. In the virtual one created by his headset, he has just looked into a mirror to find he has turned into a giant insect. “I jumped when I saw myself,” Mr Syrovatka says, as other pupils from Prague’s Austrian Grammar School take turns in the installation. They had arrived sullenly, expecting a lecture. Soon they are chattering about how it feels to be Gregor Samsa.

“The opening of ‘The Metamorphosis’ is a nightmare,” says Mika Johnson, a lecturer at Prague Film School and a Franz Kafka fanatic. In Kafka’s story Gregor wakes to find himself transformed into a speechless bug. His family bangs on the door, pleading with him to respond; his boss berates him. To Mr Johnson and his team, Gregor’s anguish was ideal for virtual-reality (VR) adaptation. “It’s a perfect coincidence of technology and text,” says Berthold Franke, regional head of the GI, the German cultural association that funded the project. “You’re transformed by the headset, then you’re transformed again in the story.”

“VRwandlung”—the name plays on the story’s German title “Die Verwandlung”—is on view in Prague until the end of March. It both showcases a new way to enrich literature, and implicitly demonstrates what is irreducibly special about reading. Visitors find themselves in Gregor Samsa’s bedroom; looking down reveals a greyish carapace and six stick-like limbs. Walking around brings floppy antennae into view. A window reveals a drab street. A mirror reflects the predicament that he is—you are—in. The entreaties of mother, father, sister and boss meld with the patter of rain and an ever-faster heartbeat.

“Imagine the strain and stress he’s under,” Mr Johnson says. “I wanted to preserve all that in the hope of triggering real emotional responses.” That he appears to have done. Taking off the headset, Susanne Reif-Breitwieser, Mr Syrovatka’s German teacher, exhales sharply. “I’m glad I’m not an insect,” she says. “Those annoying antennae, that complete helplessness.”

If enthusiasts such as Mr Johnson have their way, literature may be in line for the virtual treatment, after VR-gaming and VR-pornography. “VRwandlung” reveals the technology’s potential, and its constraints. One is cost. Immersive VR-systems rely on expensive infrared grids to track users through sensors on their hands and feet, meaning spaces are small. Interaction with computer-generated effects is especially pricey. Then there is the problem of a book’s finitude: the inevitable ending contradicts the basic premise of VR, namely that the user can decide the outcome.

In other ways, of course, in its metaphors and ironies Kafka’s story is much richer and more provocative than an installation could match. Ms Reif-Breitwieser identifies one deficiency. Praising the project for making a classic enticing to her students, she quibbles with the depiction of the creature. Kafka famously used an indeterminate term, Ungeziefer, to describe Gregor’s new form (English translations such as “insect” or “vermin” do not convey its ambiguity). He implored his publisher not to illustrate the beast. “I felt immersed in it,” says Ms Reif-Breitwieser, “but I’m not sure it’s Kafka’s world.”

Still, other devotees are working on metamorphoses of their own. Along with his students, Joseph Nugent of Boston College is applying VR to James Joyce’s masterpiece “Ulysses”. “You can’t map a city with all its things and its people—the technology is not there and it would be way too expensive,” Mr Nugent acknowledges. “You have no chance to replicate the pace or complexity” of the novel. All the same, in the past two years his students have reconstructed five scenes, even if they are mere “slivers” of the book’s depths.

Aware of the obstacles, Mr Johnson set out to find a text that fits the parameters of the technology. It occurred to him that the opening of “The Metamorphosis” takes place in a small room and that, initially, interaction with other characters and objects is minimal. Gregor’s reactions are paramount, allowing the VR-user to slip into a largely passive role. To heighten the experience he eschewed a purely computer-generated set. Instead a scale model was built, photographed and “stitched together” into a virtual, 3D world—a homage, Mr Johnson says, to “classic Czech animation films”, which also gave the room and its surfaces “more texture”. “Let’s be clear,” he emphasises, “it’s an adaptation in VR, it’s not a reproduction of the text.”

For all that, “VRwandlung” captures the allure and risks of modernity in Kafkaesque style. Reiner Stach, a Kafka biographer who helped with the project, thinks the author “would have loved a new technology like this.” Kafka once fantasised about combining stereoscopic postcard-viewers with moving pictures to create 3D films. “But he would have immediately seen the dangers, too,” Mr Stach adds. What if VR became so immersive that people preferred it to reality? “He would have found that idea unheimlich.”