MIRRORS AND MASKS: THE LIFE AND POETIC WORKS OF ANNA AKHMATOVA 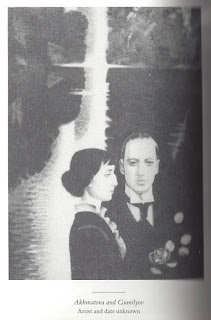 THE LIFE AND POETIC WORKS OF ANNA AKHMATOVA

A POET'S LIFE CAN BE REFLECTED IN MANY MIRRORS. The life of Anna Akhmatova has been reflected in autobiographical notes, recorded conversations, letters and diaries of contemporaries, and criticism of her works. Yet she remains mysterious in many ways. She was discreet about the events in her personal life and restrained in expression. Though often inspired by real events or emotions, her poems may mask more than they reveal. Akhmatova warned against scrutinizing her lyrics for insight into her thoughts and feelings: "Lyric verse is the best armor, the best cover. You don't give yourself away.’ (1)

Akhmatova practiced her art under extraordinarily difficult conditions in one of the most complex epochs of Russian history. Despite the hardships she endured, Akhmatova never expressed self-pity: instead, she transformed personal pain and the tragedies of her nation into transcendent and immortal lyrics: "I never stopped writing poems. In them is my link with time, with the new life of my people. When I wrote them, I believed in the resounding rhythms reflected in the heroic history of my country. I am happy that I lived in these years and saw events which cannot be equalled.’ (2)

Akhmatova was born in a time of chaos and ferment. The revolution was slow in coming, but increasingly violent and radical political outbursts heralded its arrival. As the end of the Romanov dynasty and the twilight of Imperial Russia drew near, (3) Tsar Nicholas II, a notoriously weak and indecisive ruler, made frantic efforts to preserve the foundations of a crumbling monarchy.

She was born Anna Gorenko on 23 June 1889 (11 June, Old Style) (4) in Bolshoy Fontan on the Black Sea, near Odessa, in the Ukraine. Her father was Ukrainian (5) and her mother of Russian origin. Akhmatova's family moved north to the town of Pavlovsk and soon after to Tsarskoye Selo, near St. Petersburg, when she was eleven months old. She grew up there amidst elegant pavilions, allées lined with tall trees, and beautiful parks with replicas of ancient statues. She was deeply af-fected by the presence of Alexander Pushkin, the great Russian poet, who had attended the Tsar-skoye Selo lyceum for sons of the nobility.

As a child, Akhmatova heard the sounds of the Russian poet Nikolay Nekrasov, whose verses were full of sympathy for the plight of the lower classes. Her mother, who had been active in politics in her youth, recited his poems to her.' (6). Nekrasov's descriptions of the Russian landscape influ-enced Akhmatova's own poetry. His works presented Akhmatova with examples of Russian women of all classes who were oppressed, but who displayed a fortitude that Akhmatova later displayed in both her life and work.

By 1911, she was publishing under the name of Anna Akhmatova. Her pseudonym, Akhmatova, came from the family name of her maternal great-grandmother, and of the last Tatar princes from the Horde. (7) The impetus for the name change, according to Akhmatova, was her father. When he found out that she was writing poetry, he commanded her not to "bring shame upon [the family] name." (8).

In 1906, Akhmatova returned to Kiev to complete her last year of studies at the Fundukleyevskaya Gymnaziya. She joined the Faculty of Law at the Kiev College for Women in the autumn of 1907, but soon grew bored. At this time, her letters reflect her unhappy state, as she compares herself to Cassandra: "I have murdered my soul, and my eyes are created for tears, as Iolanthe says. Or do you remember Schiller's prophetic Cassandra? One facet of my soul adjoins the dark image of this prophetess, so great in her suffering. But I am far from greatness.’ (9)

In letters written between 1906 and 1907, Akhmatova reveals her ambivalence about the young poet, Nikolay Gumilyov, who was ardently pursuing her. They had met in 1903 while attending school. Valeriya Sreznevskaya describes him at this time, noting he was not very handsome and was somewhat wooden, arrogant and insecure; nonetheless, he had a certain elegance. (10)

Despite her professed indifference to him, Akhmatova married Gumilyov on 25 April 1910, in a church near Kiev, believing him to be her "destiny." Gumilyov was the first to publish Akhmatova's poems, in his journal “Sirius” in 1907. He himself had already published two collections of poems, “The Path of the Conquistadors”, and “Romantic flowers”, both heavily influenced by the French Symbolists. (11) In his poetry Gumilyov saw himself as a conquistador and in fact journeyed abroad in quest of the unknown; he made frequent trips to Africa, starting in 1907. (12)

The couple spent their honeymoon in Paris. In September 1910, Gumilyov left his young bride for another African expedition. While he was away, Akhmatova attended Professor Rayev's courses on the History of Literature. (13)

In the spring of 1911, Akhmatova spent several weeks in Paris alone, and formed a close friendship with the Italian painter Amedeo Modigliani. She and Gumilyov settled in Tsarskoye Selo in his family home and spent summers in Slepnyovo on his mother's estate in Tver province. However, Gumilyov's trips abroad and constant desire to seek adventure elsewhere dominated their marriage and helped destroy it.

In Petersburg, the flourishing literary scene was dominated by the Symbolists. (14) Practitioners of Symbolism, who viewed the poet as the bearer of a spiritual message rather than as a social re-former, began to interpret the impending revolution as an apocalyptic event that would purge Russia of all corruption and sin. Alexander Blok, a key Symbolist figure, was one of Akhmatova's greatest influences. Rather than a continuation of his work, hers was a conscious reaction against it; however, some of her poems show traces of Symbolism with its love of fantasy, costume, and the eighteenth century. Later in her career, Akhmatova paid homage to the importance of Symbolism: "The modernists did a great thing for Russia. They taught people to love verse again."(15)

Meanwhile Akhmatova was becoming a leading figure in the artistic world of Petersburg. She developed from a shy, young girl to a self-assured, regal woman in only a few years. Many poets and other members of the intelligentsia gathered in the apartment of Vyacheslav Ivanov, known as "The Tower." There, in the spring of 1911, Akhmatova first met another young poet, Osip Mandelstam.

Another site at which the various artistic and cultural currents converged, met, and clashed was the cellar cabaret, the Stray Dog, which opened on 31 December 1911. The central figure of the cabaret was actress, dancer and singer Olga Glebova-Sudeikina. Poets who recited at the cabaret included Akhmatova, Mikhail Kuzmin, Mandelstam, and Vladimir Mayakovsky, a member of the Futurist movement, which rejected all art of the past and embraced the age of Modernism and technology. Another frequent participant in the Stray Dog events was avant-garde composer Artur Lourie, who, inspired by the broad freedoms initially granted to artists, served as the first Soviet Commissar of Music. He had a brief affair with Akhmatova in 1913. (16)

In 1911, Gumilyov played a leading role in forming the Poets' Guild, following his break with Ivanov. (17) Six of its members — Gumilyov, Akhmatova, Gorodetsky, Mandelstam, Vladimir Narbut, and Mikhail Zenkevich— founded Acmeism, a movement that rejected the mysticism and ornate style of Symbolism. By the time Akhmatova published her first collection, “Evening”, in 1912, the Symbolist movement was in crisis. In a pivotal article called "Overcoming Symbolism" (1916), critic Viktor Zhirmunsky asserted that Akhmatova, Gumilyov and Mandelstam had transcended the Symbolist aesthetic.

Akhmatova published forty-six poems in “Evening”. The 300 copies sold out quickly. Mikhail Kuzmin, who wrote the preface, went so far as to assert that the appearance of “Evening” marked a dramatic turn in Russian poetry. (18) The eminent writer and critic Korney   Chukovsky observed that the youth of two or three generations fell in love to the accompaniment of Akhmatova's poetry. (19)

“Evening” concentrates on the many facets of love, from awakening hope to joyful fulfillment, from disillusionment to the last embers of a dying relationship. Her verse is distinguished by its sparseness and its restraint, in sharp contrast to the more extravagant Symbolist verse.

These poems are not necessarily autobiographical self-portraits. The poet takes on a broad range of personas, from a peasant woman beaten by her husband to an elegant member of the upper class; in rare instances, there is a male speaker. In September 1912, soon after “Evening’s publication, Akhmatova gave birth to a son, Lev Gumilyov; nevertheless, there were indications that both Akhmatova and Gumilyov were growing disillusioned with their marriage. (20) There are conflicting accounts   about Akhmatova’s attitude toward motherhood: Sreznevskaya claims that the birth made Akhmatova feel confined," while Pavel Luknitsky attests to her having had strong maternal instincts which began to dissipate only after Gumilyov's family took the child, against Akhmatova's wishes." (22)

Akhmatova’s second volume of poetry, “Rosary”, was published in 1914.  Many poems make allusion to places in St. Petersburg" and Tsarskoye Selo closely associated with her life. Others speak of love: unrequited love, a theme she had introduced in “Evening”; disappointment in love as the price paid for the poet's lyrical gifts; and passionate, earthly love juxtaposed with religious motifs. This led critic Boris Eikhenbaum to call Akhmatova "half-nun, half-harlot," a phrase that would later be picked up and used maliciously against her by the Soviet authorities. Other critics argue that these poems show her suffering to be not merely egocentric and personal but also distinctly Christian in character.